Bicol, Cordillera, ARMM lead regions with most number of officials on ‘narcolist’
By: Jaymee T. Gamil - Reporter / @jgamilINQ
Philippine Daily Inquirer / 05:19 AM May 01, 2018 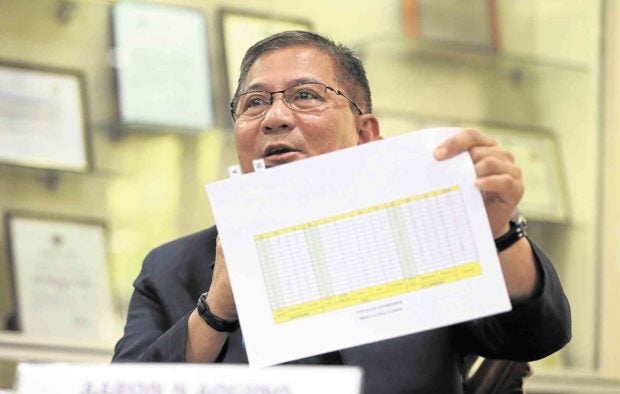 The Philippine Drug Enforcement Agency (PDEA) on Monday said that 207 barangay officials, 90 of them village chiefs, were involved in illegal drug activities as users, pushers and protectors of the illicit trade.

PDEA Director General Aaron Aquino, in a press conference at the agency’s central office in Quezon City on Monday, said the list, which included 117 barangay councilors, would be used as basis for filing criminal and administrative cases in the Ombudsman and in local courts in the coming weeks.

“Some barangay officials are [narcotics] users, pushers, even [going up to] the level of drug lords. But most of them are protectors,” Aquino said.

He called out three regions for having the most number of barangay officials linked to illegal drugs: Bicol with 70, Cordillera with 34, and the Autonomous Region in Muslim Mindanao (ARMM) with 13.

The list is a combination of “validated” watch lists from the PDEA, Philippine National Police, National Intelligence Coordinating Agency, and the Intelligence Service of the Armed Forces of the Philippines since the Duterte administration took over in 2016.

The list was revealed two weeks before voters elect a new set of barangay officials. Aquino said the PDEA was disclosing it due to an order from President Duterte.

“I don’t have any options. The President gave me an order to release it. But before releasing, we parsed through the data,” he said.

“Public office is a public trust. Every resident has a right to know what their public official is doing. Officials are always accountable to the people, so it’s only fair that people should know who they will be electing,” Aquino said, explaining why law enforcement agencies were releasing the list ahead of the barangay elections and without the filing of any case in court.

The list, as of Monday afternoon, had yet to be sent to local offices of law enforcement agencies and to the Commission on Elections (Comelec).

In an interview after the press conference, acting Interior Secretary Eduardo Año said this would be done during the campaign period, from May 4 to 12.

But James Jimenez, spokesperson for the Comelec, said being on the watch list of barangay officials allegedly involved in illegal drugs would not automatically lead to one’s disqualification from running in the May 14 barangay and youth polls.

Jimenez said the so-called “narcolist” was more of a tool for voters’ education than a tool to disqualify candidates, so they would know which candidates to support.

Responding to concerns that such watch lists tended to be “hit lists,” in which named individuals ended up dead either at the hands of vigilantes or in police operations, Aquino said: “There’s no truth to that.” —With a report from Julie M. Aurelio