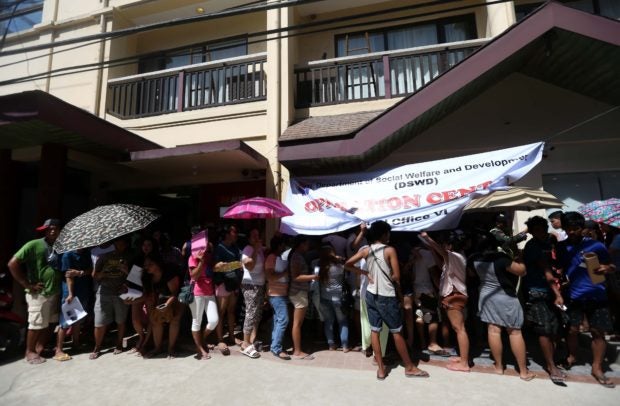 Workers line up at the DSWD Operation Center to avail of the transportation allowance the government is giving so they can leave Boracay Island. INQUIRER PHOTO/LYN RILLON

After the mass exodus of tourists from Boracay island following its closure on April 26, resort workers are expected to leave in droves as well.

Rogelio Dignus, 52, a carpenter who was originally from Davao, said hunger awaits workers who will stay.

After working in Boracay for 18 years, Dignus said he wants to go home to Davao. So when he learned that the Department of Social Welfare and Development (DSWD) was giving transportation and meal allowance to workers, he rushed to the operation center.

He said he has not seen his family for almost two decades so this would be his chance.

Asked what he plans to do for the next six months, he said he would take the time to rest, but if there is a construction job available, he would probably take it.

Dignus disclosed that he used to make at least P900 a day so he could not accept the cash for work program the DSWD is offering construction workers like him, which ranges from P300 to P500. 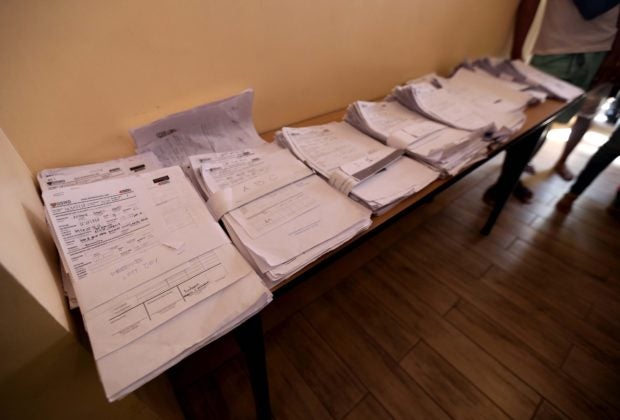 Applications for transportation allowance pile up at the DWSD Operation Center in Boracay. INQUIRER PHOTO/LYN RILLON

Boracay has an estimated 19,000 registered workers and 17,000 informal workers, according to DSWD. Thousands of these displaced workers are seeking financial aid from the agency.

DSWD officer in charge Emmanuel Leyco said the department has allocated P500 million to assist displaced workers under its Assistance to Individuals and Families in Crisis Situation program. They provide transportation aid to workers from P500 to P5,000.

The Department of Labor and Employment (DOLE) has also started its cash for work program, but it can only provide informal workers with a job for one month.

Resyl Ridondo, a hair braider for tourists, used to earn P3,000 to P5,000 a day, especially during the peak season. Under DOLE’s cash for work program, she earns only P323 per day helping cleanup Bulabog beach on the eastern side of the island.

Antoinette Blancaflor, a singer in a bar-restaurant, used to make P800 to P1,500 per night from tips. The bar she works for has not closed yet, but she grabbed the chance to work for DOLE.

“Okay na siguro ito muna for one month, after that hanap na naman ng bagong magandang gawin (I think this is OK for one month. After that I’ll just look for other things to do),” she said. “Baka umuwi muna ako sa pamilya ko sa Passi [I might go home to my family in Passi, Iloilo],” she said.

DOLE said about a thousand workers have been hired since they started the program.

The Department of Public Works and Highways (DPWH) is also hiring locals for its road widening and demolition works on the island.

Meanwhile, the Department of Environment and Natural Resources (DENR) has already identified projects that would need workers, including cleaning up the wetlands, clearing debris, and constructing fences. /ee/ac