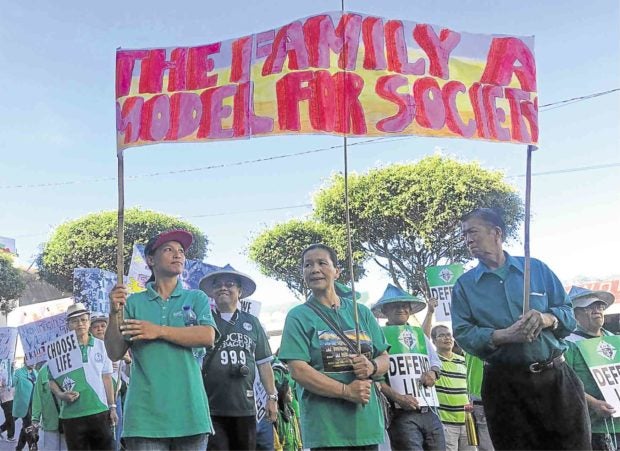 YES TO MARRIAGE More than a thousand Catholics marched through downtown Baguio on Saturday, April 28, to express their objections to a divorce bill in Congress. —VINCENT CABREZA

BAGUIO CITY — More than a thousand Catholics, among them senior citizens and students, marched through downtown Baguio on Saturday to make a stand against proposed laws on divorce and same-sex unions and to express their outrage against extrajudicial killings.

“Our nation is embracing a culture of death,” said Baguio Bishop Victor Bendico during a Mass before the march of devotees who proceeded to Session Road after emerging from four Baguio churches at 8 a.m.

“Congress is working to pass House Bill No. 7303 to usher the divorce law [where] marriages for any reason can be dissolved if the parties wish so,” Bendico said.

“We recognize there are marriages with difficult situations but there are legal remedies in our civil and canon laws,” Bendico added.

The bishop also said there were “ongoing oral debates on a petition that seeks to pave the way for same-sex unions which has been translated to House Bill No. 6595.”

“That petition is challenging provisions of the Family Code on marriage, particularly Articles 1 and 2 which uphold marriage between a man and a woman,” Bendico said.

“We recognize that there are those with homosexual orientations and we give due respect to them,” he added.

“[But] gender politics and societal reconstruction are not the answers,” the bishop said.

He also criticized sectors of government which advocated these changes.

“They can undermine basic structures of our society, veiled by wrong information. The dignity of the human being is taken for granted,” Bendico said.

“We are not here to incite rebellion, [but] to incite love [and] ignite our responsibilities to protect life, high morality, marriages and faith,” said lawyer Ramon Bayan of the Church’s Commission on Family and Life, which organized the protest march dubbed “Walk for Life.”

President Duterte had expressed opposition to divorce, but “a promise today could be reversed by our President,” Bayan said.

Contraceptives’ effectThe widow of a substance abuser, who was murdered at their home by unknown gunmen in 2016, joined the Church rally, to denounce killings committed while the government waged a campaign against drugs and criminality.

Bendico said the breakdown in values could be traced back to contraceptives.

Pope Paul VI “prophesied that widespread use (of contraceptives) would lead to conjugal infidelity and the general lowering of morality,” he said.

The bishop claimed that the late Pope’s insight was validated by 2001 Nobel Prize Winner for Economics George Akerlof who concluded that “widespread use of contraceptives has led to higher rates of divorce, single parenthood, drug abuse and other social evils.” —Vincent Cabreza