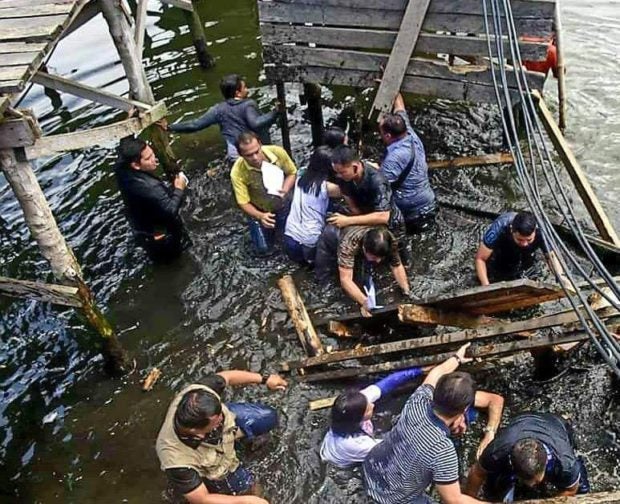 ZAMBOANGA CITY—Two lawmakers had their firsthand experience with a poorly built government project on Thursday, falling through a bridge and suffering slight injuries.

The group was inspecting the site at Sitio Hongkong in Barangay Rio Hondo, where victims of the 2013 siege of the city by Moro rebels had been relocated.

“Benitez and I were talking about the many issues we’ve noted about the place when suddenly, we heard loud cracks and I was the first to fall through,” Lobregat said. He suffered only scratches.

“I am alive and well and kicking,” he said.

Lobregat said he thanked God that nothing serious happened. “I was imagining if there were poles sticking out and I was the first one to fall and they fell over on top of me, can you imagine in the movie?”

He and the rest of the party clambered on the collapsed walkway with help from soldiers and other people.

Lobregat and the other officials were accompanying Benitez, chair of the House committee on housing and urban development, in his inspection of the houses following complaints about the use of substandard materials.

Benitez said he was trying to determine who was responsible for the project and the supposed use of poor-quality construction materials.

“This was the first time in my search for substandard projects that I encountered such experience,” he said.

“We will hold people accountable and we have to address safety. They were spared by the calamity, the human disaster only to be victims of poor housing design and materials,” he added.

Benitez said it was obvious the foundations of the footbridge were made of substandard materials.

The footbridge was built in 2016 as part of a P53-million NHA housing project for some 240 families affected by the siege of Moro National Liberation Front rebels, said Rasdie Mukarram, barangay chair of Rio Hondo.

But last year, Mukarram told the Inquirer, the village replaced the foundations because the original posts had rotted.

He said the NHA had been ignoring the complaints of the barangay officials.

“To our leaders, you saw how these NHA officials fooled our people by putting up poor materials in our housing project. I am sad that it happened to them but this poor work will never be addressed if we only used our own voices,” Mukarram said.

Read Next
Bacolod nurse tops bar examinations
EDITORS' PICK
vivo brings to the Philippines a powerful smartphone with a slimmer body, the vivo Y02s for only PHP 6,499
Palace: Biggest supermarkets in PH commit to sell sugar at P70 per kilo
What to watch out for when selecting a video surveillance solution
Heads may roll at BOC, says Palace if sugar smugglers are allowed to use recycled import permits
House energy committee chair Arroyo bats for cheap electricity
DOH reports increase in daily COVID-19 deaths, mostly unvaxxed
MOST READ
Brian Poe-Llamanzares receives his PhD in Public Administration
Metro Manila’s No. 1 wanted man arrested, says NCRPO
Alyssa Valdez to miss Creamline’s AVC Cup campaign
DepEd to give teachers P5K cash allowance within first week of classes
Don't miss out on the latest news and information.