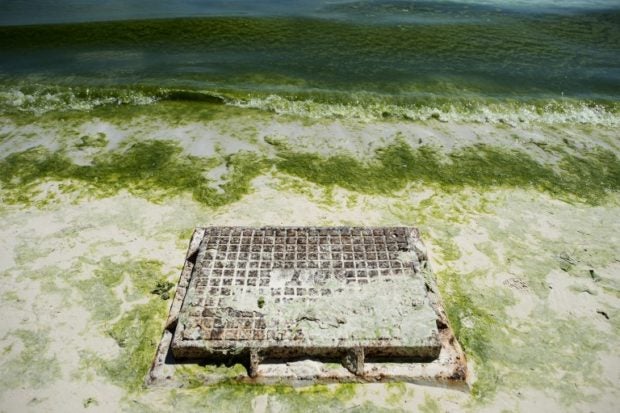 Green algae can be seen on the bay of Boracay on April 24, 2018, ahead of its closure. President Rodrigo Duterte ordered the once-idyllic white-sand resort closed to tourists for up to six months, staring on April 26, after describing the country’s top tourist attraction as a “cesspool” tainted by raw sewage. (Photo by NOEL CELIS / AFP)

BORACAY ISLAND, Aklan — The interagency task force tasked with the rehabilitating Boracay has scrapped restrictions on media coverage of the six-month closure of the Island.

In a press conference at the Discovery Shores Boracay here on Wednesday, Tourism Assistant Secretary Frederick Alegre said journalists accredited by the agency would have unrestricted access to the island.

“Media is free to roam because we trust that media is a responsible sector of society and we trust that they will conduct themselves professionally… We will allow you to cover every thing that is happening here. No restrictions,” Alegre said.

The Department of Tourism had earlier announced that journalists planning to go to the island to cover and report on the six-month closure first had to apply for accreditation from the DOT before they could be issued a special identification card.

The scrapped guidelines would have allowed journalists to stay on the island only from 8 a.m. to 5 p.m., and they would have been required to go back to the mainland of Malay town.

The interagency task force had also wanted the movement of journalists to be limited only in designated areas and escorted in other areas.

But these provoked an outcry from journalists who viewed the restrictions as prior restraint and would impede on news gathering and reporting. /atm