Man on the moon may soon be Chinese 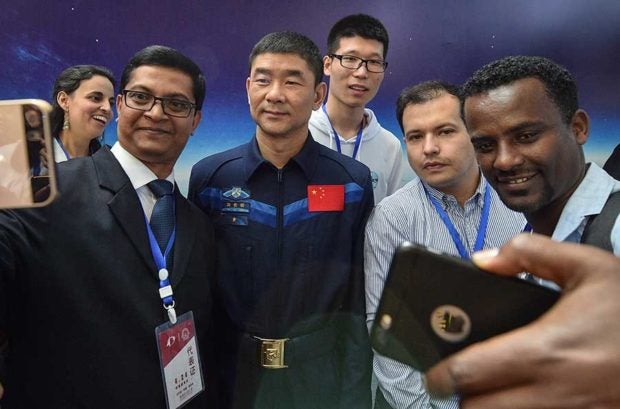 Astronaut Liu Boming attends the China Space Day celebration at the Harbin Institute of Technology on Tuesday in Harbin. Liu flew aboard the Shenzhou VII in 2008. PHOTO from Su Dong/China Daily/Asia News Network

China’s space authority said on Tuesday it plans to build a manned scientific research outpost on the moon.

In a video displayed at a ceremony in Harbin, provincial capital of Heilongjiang, the China National Space Administration published the country’s achievements and development road maps in the space sector, including a plan to construct and operate a scientific research station on the moon.

The ceremony was held to mark the third China Space Day, April 24, the date in 1970 when China launched its first satellite.

“We believe that the Chinese nation’s dream of residing in a ‘lunar palace’ will soon become a reality,” the administration said in the video.

The video envisions the lunar outpost having multiple tube cabins that interconnect and provide oxygen to people inside. One of the facility’s major energy sources will be solar power, according to the video.

The administration did not reveal a schedule for the construction and operation of the outpost. It added in the video that the country also plans to explore the two lunar poles.

This is the first time that China has made public a plan to have a manned lunar outpost. In November, administration officials said at an international space forum in Shanghai that China “is conducting a feasibility study for a robotic outpost on the lunar surface to conduct scientific research and technological experiments”.

Wang Liheng, a senior space scientist and academician of the Chinese Academy of Engineering, told China Daily it has become the consensus among Chinese space researchers that a manned lunar station is necessary so scientists can deepen their lunar research and explore ways for the exploitation of lunar resources. Such a facility will also help to accumulate experience that can be used for manned missions to Mars, he said.

“The first step, our researchers suggest, will be sending our astronauts to the moon to perform short-term explorations,” said Wang, referring to a manned lunar program, which has been called for by Chinese scientists for a long time.

China started sending robotic probes to the moon in 2007 and has carried out several lunar missions since then. It landed the Chang’e 3 probe, which carried the first Chinese lunar rover, on the moon in December 2013.

Pei Zhaoyu, deputy director of the National Space Administration’s Lunar Exploration and Space Program Center, told those at Tuesday’s ceremony that the Chang’e 4 probe will be launched before the end of this year and will land on the far side of the moon. Before it, a relay satellite named Queqiao, a legendary bridge in the Milky Way, will be launched in May.

Tidal forces on Earth slow the moon’s rotation to the point where the same side always faces Earth. The other face, most of which is never visible from Earth, is the far side of the moon.

Bao Weimin, head of science and technology at China Aerospace Science and Technology Corp and academician at the Chinese Academy of Sciences, said the probe will land on the Aitken Basin of the south lunar pole and will explore the sphere’s early history.

“The mission will enable us to discover what we haven’t known about the moon. Moreover, we can take advantage of the far side’s shield against Earth’s interference to make clearer observation into the deep space,” he said.

In addition to Chinese equipment, Chang’e 4 also will carry scientific payloads developed by the Netherlands, Sweden, Germany and Saudi Arabia, according to Pei.