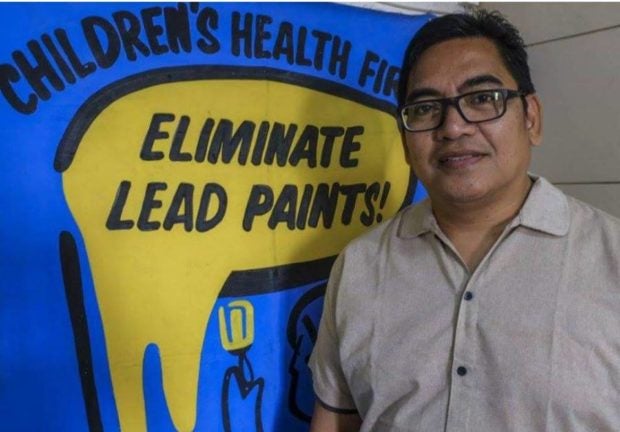 A Filipino who has championed environmental protection, health, as well as consumer and human rights in the Philippines for over 30 years has received, together with six other grass-roots activists from around the world, the prestigious Goldman Environmental Prize.

Manny Calonzo, who headed the environmental watchdog EcoWaste Coalition, was cited for his tireless and agenda-setting work against lead paint in the Philippines during ceremonies on Monday (Tuesday in Manila) in San Francisco, California.

The Goldman awards honor one grass-roots environmental activist in each of the global regions annually.

Calonzo, 54, won the award in the Island and Island Nations category.

Calonzo is also known for campaigning against lead and other toxic substances in consumer goods such as slippers and plastic shoes that cause decreased fertility in men and harm unborn children.

He led the campaign that persuaded the Department of Environment and Natural Resources (DENR) to issue an administrative order in 2013 to ban the production, sale and use of lead in paints, food packaging, toys and other products.

The Chemical Control Order for Lead and Lead Compounds issued by the DENR allows lead in paints used in households only until 2016, while the use of lead in paints in industrial and commercial buildings ends in 2019.

He aims to oversee studies of lead in paint in other Asian countries such as Mongolia, Pakistan, Malaysia and Vietnam, according to the Goldman Environmental Prize website.

The EcoWaste Coalition, which was organized in 2000, is a network of environmental and health groups pursuing sustainable solutions to waste, climate change and toxic chemicals in the Philippines.

“This recognition of our collective success in the Philippines, I hope, will inspire global efforts to ban lead paints, particularly in developing countries, at a much faster tempo. While a few countries have in recent years adopted binding lead paint laws and regulations, much work remains to adequately address this serious human health hazard,” the group quoted Calonzo as saying during the awarding ceremonies.

“The continuing collaboration by the government, industry and civil society, backed by informed and vigilant paint consumers, is crucial in ensuring full compliance to the [chemical control order] goals and targets. As children’s lives do matter, we need to keep the environment safe from lead, mercury and other pollutants that can impede childhood growth and development and negatively affect their future,” he said.

The other awardees included LeeAnne Walters, who played a key role in exposing the lead-tainted water disaster in Flint, Michigan, by working “tirelessly behind the scenes to bring justice to not only her immediate family but all residents” of the US city.

The prize was created in 1989 by the late San Francisco philanthropists Richard and Rhoda Goldman. Winners are selected from nominations made by environmental organizations and others. The prize carries a $200,000 award.

The other winners are:

• Francia Marquez of Colombia, who rallied other women to vigorously oppose gold mining in the Cauca region.
• Claire Nouvian of France, who successfully campaigned against deep-sea fish trawling.
• Makoma Lekalakala and Liz McDaid of South Africa, who fought to stop a nuclear plant deal between their country and Russia.
• Khanh Nguy Thi of Vietnam, who used scientific research to discourage dependency on coal-fired power.