Boatmen reaping a windfall as tourists return to Hundred Islands 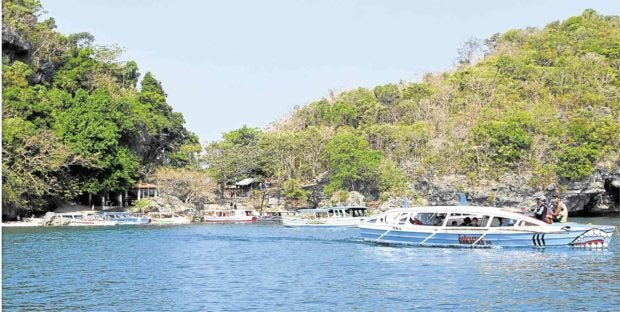 ALAMINOS CITY — The scorching summer heat in Pangasinan province has provided a windfall for boatmen taking tourists to Hundred Islands National Park here, enabling them to double or triple their earnings.

“This summer is amazing. There are so many people coming to the islands,” said 62-year-old boatman Welver Cale.

Cale operates a five-passenger boat that is rented out for P1,400 for a trip from Lucap Wharf here to Hundred Islands National Park. His boat is among more than 1,000 motorboats licensed by the city government to take tourists to the islands.

In 2016, the city government imposed a moratorium on the issuance of permits for new boats, as there were not enough tourists to ferry and not all boats were able to make daily trips, according to Rose Arguella of the city tourism office.

But they were caught off guard with the influx of 204,211 tourists from January to April 18 this year, almost twice the number of guests for the same period last year.

“We were really surprised by the sudden increase of local tourists this April,” Arguella said.

To accommodate island hoppers, the city tourism office adopted the “drop and fetch” system. Tourists would be ferried around only three islands and dropped on the island of their choice. They would be picked up at an appointed time.

This allows boats to return to Lucap Wharf to take in other batches of passengers.

“Sometimes, we can have three trips in a day,” said Cale, whose son owns the boat he operates.

Before the rule change, boatmen would stay with tourists for the entire day. Having command of the boat, guests could also visit as many islands as they wanted.

Last year, local tourists comprised the bulk of visitors, with foreigners representing a minuscule number—only 18,075 out of 561,909 guests. This year, 4,461 out of 199,750 visitors were foreigners.

South Koreans topped the number of foreign visitors in 2015 until 2017, followed by visitors from the United States. But in April this year, Americans overtook South Koreans.

Arguella said tourist traffic was heaviest on weekends. On April 8, a Sunday, which was followed by a holiday (Araw ng Kagitingan), the park had almost 9,000 tourists.

She said the city government had asked the assistance of the Protected Areas and Wildlife Bureau to determine the carrying capacity of the island and for the city to have the scientific basis for its management.

“The study would not be about limiting the number of visitors but what are needed to accommodate them without compromising the islands’ environment,” she said.

Hundred Islands National Park is composed of 123 islands and islets, but development is introduced only in 13 islands, the most visited of them are the Quezon, Governor’s and Children’s Islands.

Aside from swimming, tourists can snorkel, go island-trekking, visit caves and ride the zip lines.

Read Next
Tamaraw population up in Mindoro national park
EDITORS' PICK
House energy committee chair Arroyo bats for cheap electricity
Guarding Sara: Why next VP is getting own security team
Beyond the Chocolate Hills: A farm-to-table, heritage culinary adventure of Bohol
WHO says monkeypox is not yet a health emergency
Metro Manila logged most number of new COVID-19 cases — OCTA Research
A massive highway complex makes living in the South highly attractive
MOST READ
Leon Barretto steps up for sisters, asks dad Dennis Padilla: ‘Please stop resorting to public shaming’
Kathryn Bernardo now proud to be a morena, overcomes insecurities with BF Daniel Padilla’s help
Bea Alonzo, under lie detector test, says she wants prenup agreement with future husband
Marjorie Barretto to speak up on Dennis Padilla, kids’ relationship ‘in time’
Don't miss out on the latest news and information.