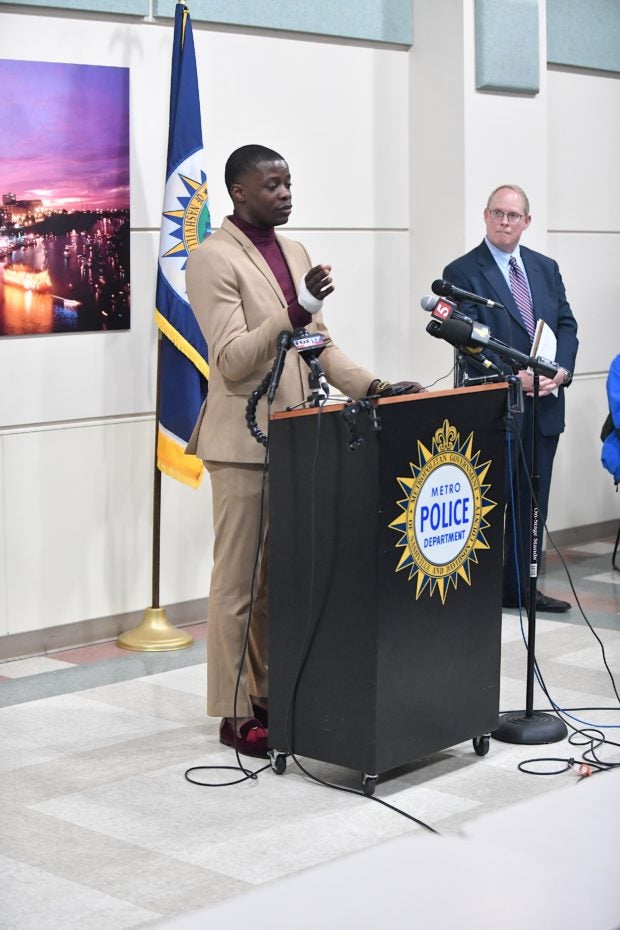 Waffle House patron James Shaw, Jr. discusses the shooting at a Waffle House where a gunman opened fire killing four and injuring two at a press conference on April 22, 2018 in Nashville, Tennessee. Shaw, 29, took action disarming the gunman and ultimately forcing him out of the Waffle House restaurant. Travis Reinking, 29, of Morton, IL, is person of interest in the shooting and is suspected to have left the scene naked. (Jason Davis/Getty Images/AFP)

Police hunted a semi-nude gunman who shot four people dead at a waffle restaurant on Sunday after he fled from a “hero” who disarmed him.

Tennessee City Police in Nashville said the suspect in the country’s latest mass shooting may have had “mental issues,” and the incident led the city’s mayor to issue an unusually blunt call for “comprehensive gun reform.”

The Metro Nashville Police Department said three people were shot dead at the all-night Waffle House restaurant in the suburb of Antioch at 3:25 a.m. (0825 GMT).

The fourth victim died in hospital and two others were wounded.

Police identified the suspect as Travis Reinking, and said he could be armed with a rifle and a handgun, after firing an AR-15 semi-automatic rifle at the restaurant, where he was nude except for a green jacket.

A military-style weapon, the AR-15 has been regularly used in mass shootings in the United States.

James Shaw, 29, told a press conference that he and his friend had sat down in the diner after visiting a nightclub, when they thought a pile of plates had crashed.

“I saw the Waffle House employees scatter. Then I looked back and I saw a person laying on the ground right at the entrance of the door,” said Shaw, wearing a brown suit jacket and with his right forearm bandaged.

Shaw said he slid from his table and moved toward the door, which the gunman was trying to enter after apparently firing through the glass.

“I’m pretty sure he grazed my arm,” said Shaw, 29. “I kind of made up my mind, because there’s no way to lock that door, that if it was gonna come down to it, he was gonna have to work to kill me.”

As the shooter was either reloading, or the weapon jammed, Shaw ran and hit him with the swivel door, leading to a scuffle.

“I managed to get him with one hand on the gun, and then I grabbed it from him and threw it over the countertop,” before getting the suspect outside, Shaw said.

Police said they believe the gunman discarded the jacket while fleeing to his home, where he put on a pair of pants and then disappeared into nearby woods.

It was the second shooting in months to traumatize Nashville, but only the latest of many in the US with large casualties.

A grassroots campaign featuring mass rallies for gun control has emerged since February, when a former student opened fire with an AR-15 at a Florida high school, killing 17 students and staff.

After that attack, businesses including Walmart and Dick’s Sporting Goods took measures to restrict access to firearms but there has been no major legislation to control guns.

In September, a 25-year-old killed one person and wounded six others during Sunday services at a church in Nashville, which prefers to be known for its country music heritage.

That was just one of the more than 30,000 gun-related deaths annually in the United States.

He said these “weapons of war” should be removed from the nation’s streets.

“It’s happening too much. Enough is enough,” Briley said.

“You don’t get to meet many heroes in life, Mr Shaw, but you are a hero. You are my hero. You saved people’s lives,” Ehmer told him. “We’re forever in your debt.”

Nashville police spokesman Don Aaron told reporters that Reinking, originally from Illinois, had been arrested by the US Secret Service for being in a restricted area near the White House in July 2017.

At that time, his Illinois firearms authorization was revoked and his weapons — including the AR-15 — were seized.

But local authorities in Illinois later returned them to Reinking’s father, “who has now acknowledged giving them back to his son,” Aaron said.           /kga