Tourists dive into the waters of Boracay from a private boat anchored off a beach controlled by a resort operator. —LYN RILLON

At least 170 hectares of land in Boracay could be placed under the agrarian reform program, contrary to earlier reports that there were only up to 4 hectares of farms in the world-famous island resort.

The Department of Agrarian Reform (DAR) said updated figures showed the lands were in at least three villages.

The DAR said the new estimate was from a study commissioned to geodetic engineer Ronald Mendoza.

Mendoza headed a team that conducted a cadastral survey in Boracay from 2011 to 2012.

A summary of the study, obtained by Inquirer, showed there were 102 hectares of agricultural lots in the village of Manoc-Manoc, 32 hectares in Balabag, and 36 hectares in Yapak that were “possible for DAR coverage.”

But a DAR official clarified that these estimates are still subject to the agency’s verification and consideration, and not yet DAR’s official position.

Erro said his estimate was based on land use data in Boracay.

The updated figures would be presented to President Rodrigo Duterte, who had announced he would distribute lands to farmers in Boracay, in a future Cabinet meeting.

The President had called Boracay a cesspool where sewage was being thrown directly into the sea and ordered a cleanup drive.

Officials said Mr. Duterte had a legal basis to carry out agrarian reform in Boracay in Proclamation No. 1064 that divided the island’s classification as 400 hectares of protected forest land and more than 600 hectares as “alienable and disposable” agricultural land.

It was issued by former President Gloria Macapagal-Arroyo.

Luis Pañgulayan, agrarian reform undersecretary for legal affairs, said, however, that the Arroyo proclamation failed to reverse Proclamation 1801, issued by the late dictator Ferdinand Marcos, declaring Boracay and other areas as tourist spots and marine zones.

Pañgulayan said the government could skip the normal process of acquiring lands in Boracay by applying Executive Order No. 407, issued by then President Corazon Aquino, seeking to accelerate the acquisition of lands for agrarian reform in Boracay. 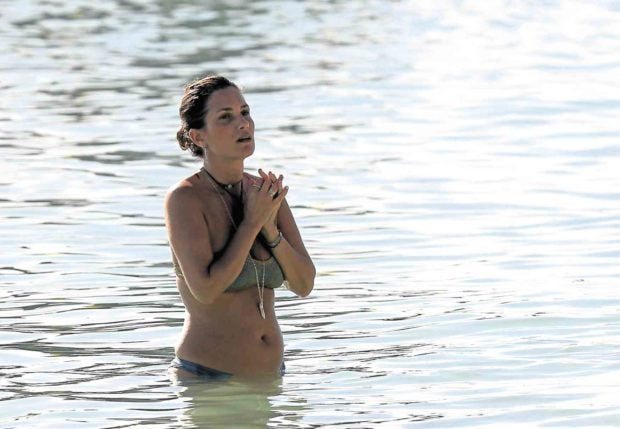 Scenes like this, of a foreign tourist taking a dip in Boracay’s shallow waters, would disappear for six months when the government starts to close the island resort on April 26. —LYN RILLON

With four days before authorities start enforcing Mr. Duterte’s order to close Boracay on April 26, residents and business operators on the island were still waiting for the written order from the President in the form of either an executive order, declaration or proclamation.

No black and white

But even without the order, guidelines governing the closure have been disseminated.

Under the guidelines, only residents would be allowed to swim in the beach at Station 1 at the northern end of the island from 6 a.m. to 5 p.m. only.

No floating structures would be allowed within 3 kilometers from the shoreline and fishing would be allowed only for Boracay residents, according to the guidelines which have not been officially released.

Officials said tourists would be stopped at the Caticlan jetty port and no visitors would be allowed except in cases of emergencies and with clearance from authorities. —With a report from Nestor P. Burgos Jr.