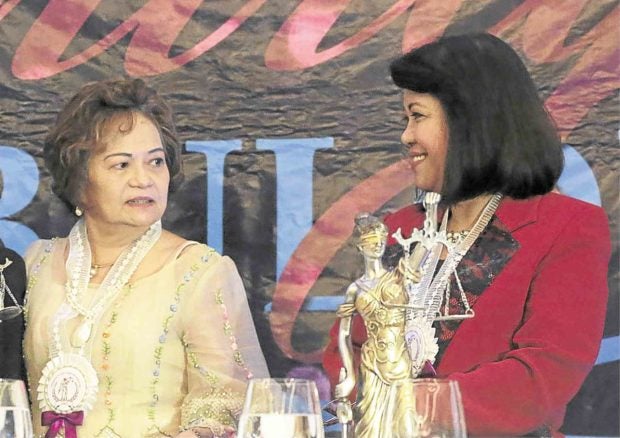 Was this a case of giving a Supreme Court associate justice a dose of her own medicine?

In a four-page letter, Jocelyn Marie Acosta said Calida should also file a quo warranto petition against De Castro for her supposed failure to submit all her statements of assets, liabilities and net worth (SALNs) to the Judicial and Bar Council (JBC) when she was appointed to the 15-member Supreme Court in December 2007, by then President Gloria Macapagal-Arroyo.

Calida was not at his office on Friday, but his staff received Acosta’s letter, the Inquirer learned.

Calida had petitioned the high court to kick Sereno out as chief magistrate due to her alleged failure to present all her SALNs since she started teaching law at the University of the Philippines (UP).

The solicitor general filed the quo warranto petition upon the request of suspended lawyer Eligio Mallari, the founder of a group composed of staunch supporters of President Duterte.

Acosta noted that Calida had described Sereno’s “nonsubmission of all her SALNs (as proof) that she lacked ‘proven competence, integrity, probity and independence.’”

“With due respect, I invoke the same grounds raised by Mr. Mallari in his letter as sufficient grounds for you to file a similar petition for quo warranto against Justice De Castro,” Acosta said in her letter, adding that De Castro should have filed a total of 39 SALNs since she has been working for the government since 1973.

But records from the JBC, the body created to vet applicants to judicial posts, showed that the magistrate had submitted only 15 SALNs, Acosta said.

According to Section 2, Rule 66 of the Rules of Court, the solicitor general or a state prosecutor, “when directed by the President of the Philippines, or when upon complaint or otherwise, has good reason to believe that any case specified in the preceding section can be established by proof, must commence such action.”

No measure of integrity

Meanwhile, Sereno, on Friday told her colleagues that the integrity of a Supreme Court justice should not be measured by mere failure to file a SALN.

In a 137-page comment, the Chief Justice again asked her fellow magistrates to junk Calida’s quo warranto petition, which argued that her inability to present all her SALNs showed that she was not a person of “proven integrity.”

Sereno said the JBC did not include SALNs as “evidence of integrity” for those applying to judicial posts under Section 1, Rule 4 of its rules.

“From the time of its creation in 1987 and for over 20 years thereafter, the JBC did not require applicants for positions in the judiciary to submit their SALNs,” she said.

“To stress, there is nothing wrong with the inability to submit complete SALNs to the JBC. Their inclusion in the short list means the JBC had found them to be persons of proven integrity,” Sereno maintained.

“Whether the Chief Justice was a person of proven integrity when she applied for the position is a political question outside the jurisdiction of this honorable court,” she argued.

In his own comment, Calida urged the justices not to believe Sereno’s testimony during the oral arguments held in Baguio City on April 10, saying that the Chief Justice’s behavior was “belligerent and evasive” while she was being questioned and that therefore, “she cannot be considered a credible witness.”