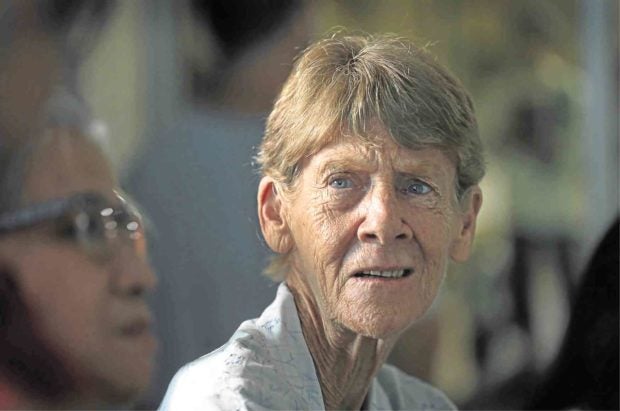 Malacañang on Friday said that 71-year-old Australian missionary Sister Patricia Fox spoke at a rally in Davao City earlier this month, disputing allegations from her defenders that she had not spoken at protest actions.

In a press briefing, presidential spokesperson Harry Roque showed a government photo that he said was taken on April 9 at a rally in front of Coca-Cola’s Davao City Distribution Center.

The photo showed Fox holding a microphone during the protest action organized by the militant groups Kilusang Mayo Uno and Gabriela, he said.

“It is very clear that she was involved, she was holding a microphone,” Roque said.

“I am just telling the bishops, Sister Fox did not tell you the whole truth. Here is the picture. She always speaks at rallies, which was why she was nabbed in 2013 during the protest at Hacienda Luisita,” he added.

He said that Fox, as a nun, was someone to which people would pay attention.

“If you have attended their rallies, they won’t allow her to just attend. Of course, she’s a nun, they would make her speak because she’s a personality who would be listened to,” he said.

Fox has since been released.

President Duterte subsequently admitted to ordering her investigation for “disorderly conduct.”—LEILA B. SALAVERRIA