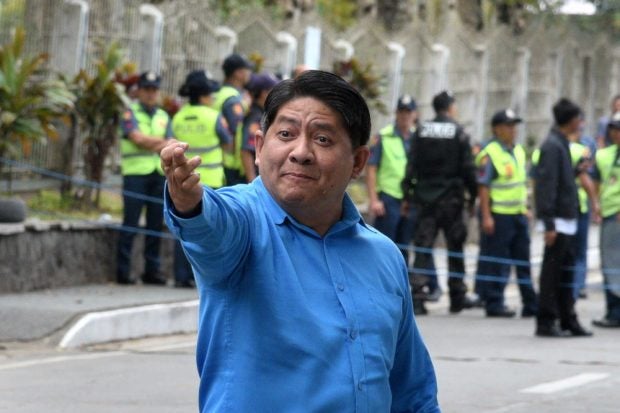 Lawyer Larry Gadon, the man who filed the impeachment complaint against Chief Justice-on-leave Ma. Lourdes Sereno, tangled with pro-Sereno supporters who booed him when he arrived at the Supreme Court summer courthouse on April 10. Gadon said he was submitting his opinion regarding a quo warranto petition filed to oust the SC leader ahead of the impeachment. Photo by EV Espiritu

Lawyer Lorenzo Gadon is facing his third disbarment complaint over the incident in Baguio City where he locked horns with supporters of Chief Justice Maria Lourdes Sereno, hurling invectives and flashing a “dirty finger.”

Complainants are concerned citizens, activists, community workers who were in Baguio last April 10 during the oral argument on the quo warranto petition against Sereno.

Gadon attended the oral argument in Baguio City to submit his opinion. Outside, the police and securities prohibited Sereno supporters from picketing in front of the high court.

The lawyer called them “bobo” (stupid) and hurled invectives at them at the same time flashing a “dirty finger.”

Based on the 19-page complaint, aside from violating the Lawyer’s Oath, Gadon also violated the Rules of Court which states that “it is the duty of an attorney…to abstain from all offensive personality…”

Complainants also cited several provisions of the Code of Professional Responsibility allegedly violated by Gadon which includes Rule 7.03 stating that “a lawyer shall not engage in conduct that adversely reflects on his fitness to practice law, nor shall he whether in public or private life, behave in a scandalous manner to the discredit of the legal profession.”

The complainants also cited Rule 8.01 which states that “lawyer shall not, in his professional dealings, use language which is abusive, offensive or otherwise improper.”

Reacting to the complaint, Gadon said “it is a nuisance case.”

READ: Gadon on his Baguio behavior: I don’t care if I’m disbarred

He said the complainants are all members of a communist group led by a former party-list lawmaker.

(They are just creating some activity for monetary gains, just like the rally in Baguio.) /jpv