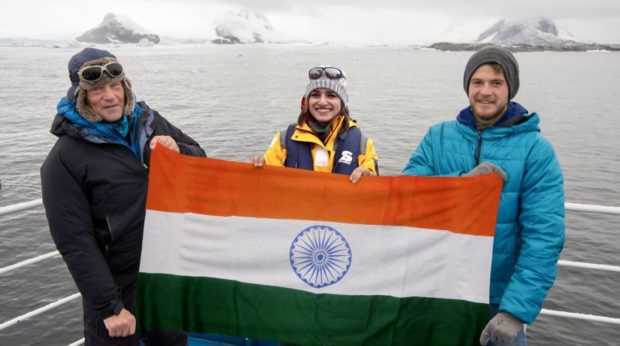 The global warming is not only causing melting of glaciers in the uninhabited cold desert of Antarctica but it is also gradually pushing several living organisms towards extinction. This is what experts observed during the 13-day Antarctica Expedition hosted by Robert Swan, Climate Force and The Explorer’s Passage.

The expedition was attended by over 90 individuals from across the world, including students, climate change specialists, UN officials, scientists, actors and adventure enthusiasts to generate leadership for climate change.

Shivangini Singh, who was part of the expedition, told The Statesman: “We observed that the populations of the Adelie and Chinstrap penguin species are currently declining while the population of Gentoo species is increasing.”

And it wasn’t always the case in the past as the temperature would be a lot cooler earlier, with abundance of adequate food source, Krill, the main food source of Adelie and Chinstrap penguins.

“The lack of food is resulting in Adelie and Chinstrap penguin as the rising mercury had reduced their habitat,” said Singh, adding this had forced population of penguins to interior areas.

On the other hand, Gentoo penguins are thriving as they can survive in warmer climate and they also happen to rely on fish too which eats krill.

“These are some of the dangerous phenomena apart from glaciers melting which are causing rise in sea level,” Singh said.

Singh is originally from Shimla in Himachal Pradesh. She works as an application developer in Bengaluru.

The IT professional said the expedition was only aimed to unite people from all over the world to understand climate change as a real threat to our way of life. But to understand as to how Antarctica is central to that picture as it constitutes 90 per cent of the world’s freshwater.

The experts were concerned over the pace of melting of glaciers in the cold desert as it would also result in submerging of sea shore areas, presently occupied by human population across the world, she added.

Singh feels new initiatives are required for preserving the environment and natural resources for future generations.

“Although we all show concern or pay lip service on increasing phenomena of climate change, there is lack of discussions or community mobilisation as to how to conserve environment and curb the phenomena of global warming,” she further added.

“The experts were of the view that first of all, we all, government, volunteer agencies and communities, need to engage in afforestation on a large scale to bring about a change in the present scenario where open spaces that once donned green cover, are turning into concrete jungles,” Singh said.

Secondly, she said, there was also need for developing community leaders who could fight for the cause of climate change and disseminate practical knowledge.

Adopting sources of renewable energy instead of fossil fuel would also help in conserving our environment for future generations.

The expedition, held from 27 February to 12 March, saw participation by Robert Swan, one of the world’s greatest living explorers, and the first person to walk on both the North and South Poles among a diverse set of people.