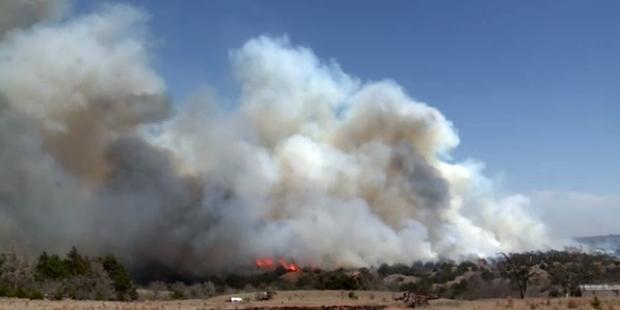 The National Weather Service says high temperatures, low humidity and heavy winds have brought Oklahoma’s wildfire threat level to its highest point in a decade. Fires have burned hundreds of thousands of acres and killed at least two people. (Photo from an AP video)

OKLAHOMA CITY — Wildfires that have killed two people in western Oklahoma are nearing conditions not seen in at least a decade because of the mixture of high temperatures, low humidity and heavy winds, the National Weather Service said Monday.

Weather service meteorologist Doug Speheger said Tuesday’s forecast represents the most potential for the spread of wildfires in the past 10 years of a database that considers a variety of factors.

Temperatures are projected to reach the mid-90s with humidity below 10 percent and winds gusting to 40 mph (64 kph). The forecast includes northwestern Texas and the Texas Panhandle where firefighting aircraft is stationed in Amarillo, Childress, Abilene and Fort Stockton.

The area also is in extreme to exceptional drought, the two most severe designations.

“We’re out there strengthening fire lines … widening lines to make sure they’re in real good shape with the wind that is on the horizon,” said spokesman Todd Schroeder at the scene of what’s known as the Rhea Fire near Leedey. “The winds that we may have tomorrow may make this really stand up and run again.”

At the 34 Complex fire near Woodward, spokesman John Nichols said firefighters are doing much the same thing.

“The winds are coming, but wet weather is supposed to be coming too, and we’re hoping the wet weather will arrive,” Nichols said.

The weather service says rain and thunderstorm chances will increase Thursday night and Friday with strong to severe storms possible in southwestern Oklahoma and western north Texas on Friday.