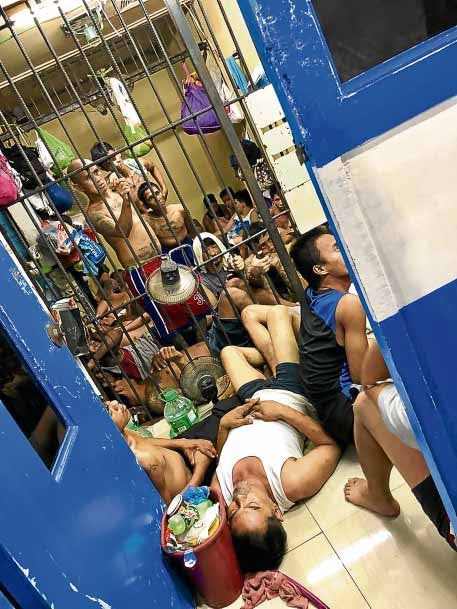 The 22.8-square-meter city jail made for 40 inmates currently holds 143. —PHOTO BY MATTHEW REYSIO-CRUZ

Overcrowding and the scorching summer heat are being blamed for the death of a Pasay City Jail inmate on Wednesday, the third to succumb to health problems in the packed detention facility since February.

Officials said Domingo delos Santos, 30, was among the seven inmates who were rushed to the hospital after fainting. The 30-year-old drug suspect, who was arrested three weeks ago, was declared dead on arrival.

Housed in the same building used by the police investigation and detective management section, the 22.8-square-meter jail is originally meant for only 40 people but currently holds 143, according to Senior Insp. Wilfredo Sangel, the section chief.

On Wednesday night, jail officials realized that something was wrong when the detainees started a noise barrage at 10:30 p.m. to call attention to the ailing inmates.

In his report, Chief Insp. Rogelio Hernandez said seven detainees collapsed “due to the congestion of the facility from the great[ness] of their numbers, coupled with the rising extreme heat during summertime.”

A rescue team brought the inmates to Pasay City General Hospital, where Delos Santos was pronounced dead at 11:15 p.m. Five of the inmates had been brought back to the jail as of Thursday.

As a remedial measure, officials allowed the temporary transfer of 14 female inmates from their cell so it can accommodate some of the male detainees. The women were moved to one of the offices of the investigation section.

Medics were now being called every two hours to check on the detainees’ condition, Sangel added.

The official attributed the swelling jail population to the nightly operations conducted by the Pasay police, which round up dozens of people mostly for illegal gambling and drinking on the streets. —WITH REPORTS FROM JOANNA P. DELOS SANTOS, JONNABETH ORTEGA AND SAMANTHA I. ALMERO