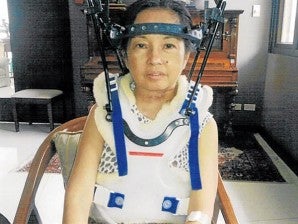 The minority bloc plans to ask the House of Representatives to place former President Gloria Macapagal-Arroyo, now a Pampanga representative, under its “protective custody,” a privilege given to  “Batasan 5” lawmakers led by then Bayan Muna Representative Satur Ocampo five years ago.

Deputy Minority Leader Danilo Suarez  said this was one of the options being considered by Arroyo’s House allies and legal advisers.

Suarez said securing protective custody for Arroyo in the House would enable her to exercise her rights as a citizen and as a lawmaker.

“If the House was able to give protective custody to Ka Satur then, I don’t see why it couldn’t give the same privilege to the former President now,” Suarez said in a phone interview.

The Quezon representative said he would formalize the minority’s plea for protective custody once the courts rule with finality on the arrest warrant issued by the Pasay City Regional Trial Court against Arroyo.

In May 2006, then Speaker Jose de Venecia Jr. granted Ocampo and four of his fellow militant lawmakers—Teodoro Casiño and Joel Virador of Bayan Muna, Liza Maza of Gabriela and Rafael Mariano of Anakpawis—their appeal to be placed under the protective custody of the chamber.

The so-called Batasan 5 were among the 16 people charged with plotting to overthrow the Arroyo administration.

The protective custody order allowed the five lawmakers to evade warrantless arrest following Arroyo’s declaration of a state of national emergency under Proclamation No. 1017 ostensibly to crush threats from both the extreme left and right.

Casiño said the protective custody granted by the House to the Batasan 5 in 2006 “does not apply to GMA (Arroyo) because unlike us at that time, she is not under threat of warrantless arrest and illegal detention.”

Arroyo’s rights have been respected and she was properly served a court-issued arrest warrant on Friday, he said.

Casiño pointed out that the Batasan 5 were obviously the victims of political persecution.

“In contrast, putting GMA in House custody will only make the House one big prison complex. We reiterate that there should be no special treatment for GMA,” he added.