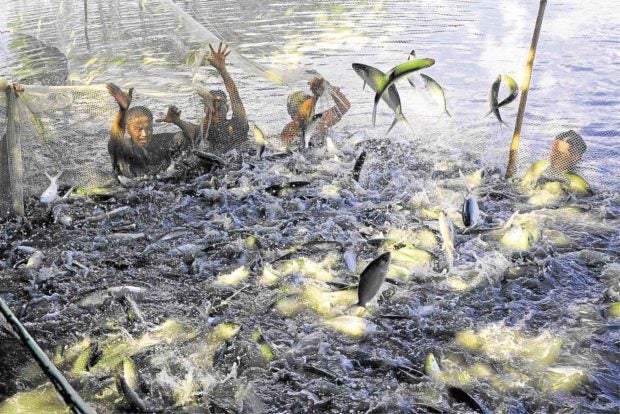 “Organic shrimp, bangus and tilapia—these are ideas for the comic books only. Good to the ear but producing organic fish is not commercially feasible. If you want to eat organic fish, just buy those caught from the sea,” said Westly Rosario, head of the Bureau of Fisheries and Aquatic Resources (BFAR) research center here.

To be certified organic, the fry should have come from a breeder fish that has not been given artificial food, he said.

“But where will we get organic fry or fingerlings when the ‘sabalo’ (parent bangus) in captivity won’t breed if given purely organic feed?” he said.

If caught from the wild, the bangus fry could be certified organic, but free-range fry contribute only a minimal volume to the industry’s demand for fry and fingerlings, he said.

According to BFAR Ilocos Regional Director Nestor Domenden, the country needs 3.2 billion bangus fingerlings annually, and half of the volume, or 1.6 billion, was imported from Indonesia. The rest were sourced from Sarangani province and the seasonal catch from the seas.

Bangus growers used to acquire their fry from the open seas and fry concessions were big income earners of coastal communities.

But the industry had lost that source, Domenden said, because sea conditions had deteriorated and most sabalo had been caught or killed because of dynamite and other destructive means of fishing.

Bangus growers have turned to hatcheries for their fry needs. Unfortunately, while the country has used current technology to establish hatcheries, these facilities could not cope with the demand.

Chicken manure had been used to fertilize organic fishponds, Rosario said, which could address some requirement for organic certification.

“Chicken manure is the best fertilizer for fishponds. Not only is it rich in nutrients to grow natural food but is light so it does not sink in the mud. The grains of the manure serve as medium for diatoms and other natural food to grow on. Chicken manure is best in growing fry to bigger fish,” he said.

But organic food advocates have expressed reservations about the artificial feed and antibiotics given to chickens, and some claim that its droppings could contaminate the fish grown in ponds.

“If you want to produce a true organic fish, you need to use worm manure as fertilizer. But its nitrogen and phosphorus contents are very low so production of natural food is low and insufficient, requiring fish farmers to introduce duckweed. So you do not get a good harvest when you do commercial operation,” Rosario said.

He said the BFAR had also not succeeded in producing organic bangus, tilapia and shrimps. “A 1,200 square meter of pond produced only 5 kilograms of shrimps. Bangus and tilapia, on the other hand, did not have firm flesh that would separate from the bones when cooked,” he said.

The most that organic fish farmers can do is to be honest. “They could admit to their clients, ‘This bangus is cultured using organic fertilizer and not given artificial food for the first three months but given commercial feed in the last two months,’” Rosario said.