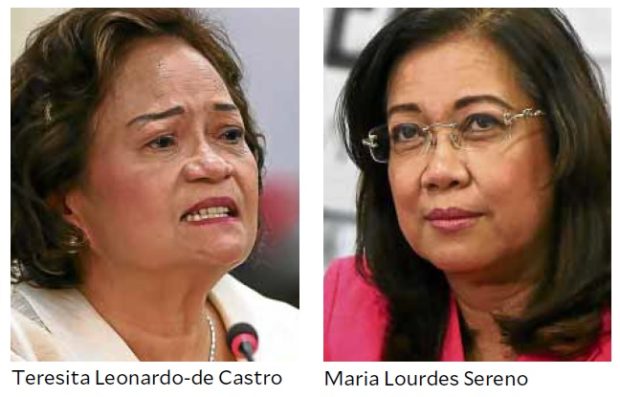 Tempers flared as Chief Justice Maria Lourdes Sereno sparred with some of her colleagues on the Supreme Court on Tuesday during oral arguments on Solicitor General Jose Calida’s petition to invalidate her appointment as the country’s top judge, bypassing an impeachment process in Congress.

A day after President Rodrigo Duterte publicly threatened to unseat her, Sereno was palpably in fighting mood from the get-go, locking horns with Associate Justice Teresita Leonardo-de Castro, who grilled her on her supposed failure to submit her statements of assets, liabilities and net worth (SALNs).

“Did you religiously comply with the submission of SALNs? The law provides that all government officials and employees are supposed to file a SALN upon assumption of duty. Do you agree to that?” De Castro asked Sereno during the open court debate held at the Supreme Court session hall in Baguio City.

“I maintain that I have consistently filed my SALNs,” Sereno told her fellow magistrates, 13 of whom had forced her to take an indefinite leave since March 1.

A heated exchange quickly ensued between the two justices after De Castro mentioned that Sereno apparently failed to comply with the requirement of the Judicial and Bar Council (JBC) on the submission of SALNs when Sereno applied as Supreme Court associate justice in 2010.

De Castro also noted that one of the SALN documents that Sereno presented to the JBC had the date “2006” when it reflected her wealth as of Dec. 31, 2009, which she submitted in 2010.

She also asked why Sereno could not produce her SALNs when she was a law professor at the University of the Philippines from 1985 to 2006.

Sereno quickly replied that she actually had in her possession the supposedly missing documents, but she would rather present them during her impeachment trial in the Senate.

She also argued that the high court had previously ruled that just because the SALNs were missing did not mean that she did not submit the documents.

Acting Chief Justice Antonio Carpio, who presided over the proceedings as the most senior justice after Sereno, had to intervene twice to remind the Chief Justice to let De Castro finish her questions and to limit her answers to De Castro’s queries.

Sereno said the efforts to remove her should not be compared to the impeachment of the late Chief Justice Renato Corona, arguing that she had never been accused of corruption like Corona.

On questioning by Associate Justice Marvic Leonen, Sereno said the submission of SALNs became a JBC requirement only after the ouster of Corona in 2012 and that those applying as associate justices had to present only two SALNs.

Sereno said the integrity of a Supreme Court justice should not be contingent by mere submission of SALNs.

“It doesn’t rise to the level of an integrity question. SALN is not at all mentioned ever in the JBC as an integrity document,” Sereno said.

In fact, Sereno said the JBC, the body tasked by the Constitution to vet candidates for judicial posts, had already passed upon her eligibility to occupy the country’s highest judicial office.

She said Associate Justice Diosdado Peralta, who was a member of the JBC when she applied for the office of Chief Justice, should have raised the question before then President Benigno Aquino III appointed her.

In his opening statement, Calida accused the Chief Justice of being a “usurper” since her designation should be declared void from the start due to her failure to present at least 10 SALNs as required by the JBC.

He also defended his decision to seek judicial intervention and skirt the impeachment process in Congress, saying the quo warranto petition was the “appropriate remedy to determine the eligibility of Sereno to be appointed as Chief Justice.”

“Sereno’s assumption of the position of Chief Justice under the color of an executive appointment is a public wrong that can only be corrected by quo warranto,” Calida told the court.

“Her appointment is tainted with invalidity because she is ineligible,” he contended. “The Constitution does not exclude the filing of a petition for quo warranto against an ineligible impeachable officer.”

Read Next
Bishops ask: Is there not a separation of powers?
EDITORS' PICK
Duterte: Authorities may take over hotels, but it’s not a ‘remedy’ in a democracy
When will PH get enough COVID-19 vaccines? ‘I really don’t know,’ Duterte says
Smart introduces Smart Barkada with the launch of Double GIGA
LT Group, Inc. Notice of Annual Shareholders’ Meeting 2/2
Duterte defends govt’s efforts vs COVID in 2020
Smart is fastest 5G Network in PH – Ookla
MOST READ
‘Duterte a total failure as leader. He must step down’ – group
Duterte ‘privately’ dealing with China invasion in West PH Sea – Palace
Ramon Tulfo says gov’t running PH like a ‘headless chicken’
Stop acting like a colonizer, PH business groups tell China
Don't miss out on the latest news and information.