There are no farms for land reform in Boracay | Inquirer News

There are no farms for land reform in Boracay 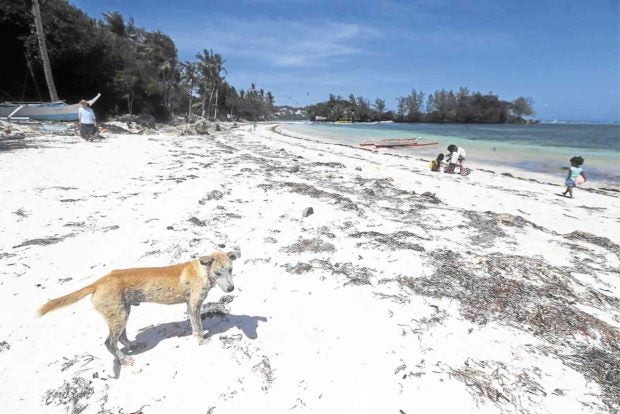 DOG DAYS Boracay on the throes of summer looks grim and desolate as the government cracks down on resorts abusing its bounty. —LYN RILLON

ILOILO CITY — Several Boracay residents could not believe President Rodrigo Duterte’s announcement that he would place the island under land reform.

“There are no farms here. I plant vegetables on our rooftop,” one resident told the Inquirer  in reaction to the President’s statement.

The President, who has ordered the closure of the 1,032-hectare island for six months starting April 26, said on Monday that the island would be a “land reform area” because it was agricultural and forest land subject to distribution.

Presidential Proclamation No. 1064, issued on May 22, 2006, by then President Gloria Macapagal-Arroyo, categorized 628.96 hectares, or 60.94 percent of the island, as alienable and disposable, and the rest as forest land and protected areas.

Most of the areas categorized as public land are occupied and built up with residential and commercial structures.

While only a third of the island is titled, many land occupants have been paying tax declarations for decades.

The Department of Environment and Natural Resources (DENR) earlier said that under present landownership laws, claimants to public lands would have to wait 30 years before they could apply for titles to land classified as alienable and disposable.

In the case of Boracay, that would be in 2036, reckoning from Arroyo’s 2006 proclamation.

Residents and property owners have appealed to the national government for years to address the land titling issue on the island that has led to disputes and even violent confrontations among claimants.

Environment Undersecretary Jonas Leones on Tuesday said the Supreme Court’s 2008 ruling that upheld Arroyo’s proclamation stated that before the issuance, Boracay’s lands were unclassified and therefore presumed to be state-owned, except for those already covered by existing titles such as those granted to the heirs of Ciriaco Tirol in 1993.

But since Arroyo’s proclamation rendered Boracay’s agricultural lands “alienable and disposable” and therefore subject to private ownership, the 628 hectares would now be subjected to an audit.

“The President [Duterte] said we need to audit the land issues there. It is the government which has the right to decide to whom the lands should have been sold,” Leones said in an interview with the Inquirer.

The Supreme Court upheld Arroyo’s land classification while acknowledging that the island at the time already was home to multimillion-peso private residences and commercial tourist establishments.

Leones said the audit would be an “additional concern” during the six-month closure of the island to clean up the world-famous beach destination but would not affect the rehabilitation work.

The previous reclassification of Boracay lands made by the local officials should have been coordinated with the national government, Leones said.

“The DENR needs to investigate why the titles were issued,” he said.

The DENR is the mother agency of the Land Management Bureau, the government arm responsible for surveying and distributing public land.

Leones noted that some landowners in Boracay were adamant that their titles were valid as they had originated from the Tirol titles.

He said that after the President’s pronouncement, the Department of Agrarian Reform (DAR) would become part of the interagency council on Boracay’s rehabilitation.

In a statement emailed to the Inquirer, Agrarian Undersecretary for Legal Affairs Luis Pañgulayan said Boracay’s “agricultural lands” could be covered by the agrarian reform program provided that Mr. Duterte also modified Proclamation No. 1801 issued by the late dictator Ferdinand Marcos in 1979 and reclassify public agricultural lands for distribution.