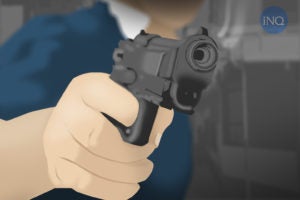 DAVAO CITY – A rookie policeman was arrested in New Corella, Davao del Norte, for reportedly killing his mother on Saturday.

“A parricide case will be filed against Dumapig,” Driz said.

She said based on the report of the New Corella police, Dumapig dry fired his issued handgun inside their home in Purok 1 in Barangay San Roque, unaware that an bullet was lodged into the chamber.

The gun went off and the slug initially hit a mirror before going through the wall and striking his mother in the chin.

The woman was rushed to a hospital in Tagum City but died along the way.

“The suspect is now being held at the New Corella Police station for proper disposition,” Driz said. /cbb