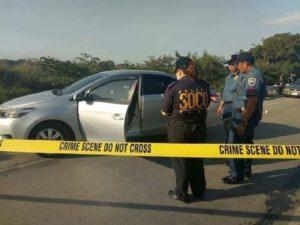 A member of the Scene of the Crime Operatives at the scene of the shootout. (Photo by MARK MAKALALAD / Radyo Inquirer)

Two suspected carnappers were killed in a shootout with members of the Philippine National Police – Highway Patrol Group (PNP-HPG) in Santa Maria, Bulacan on Saturday before dawn.

According to a report by Radyo Inquirer 990 AM, the tow men were shot dead on Bypass Road in Barangay Sta. Cruz after exchanging fire with authorities as they tried to escape. They have not been identified.

Police Supt. Sam Belmonte, PNP-HPG Region 3 Director, said that they immediately coordinated with San Jose Del Monte City Police Station to set up checkpoints after the men were spotted in the area on Friday.

When the men, who were in a car, passed through a checkpoint, they immediately opened fire and sped away, Radyo Inquirer reported.