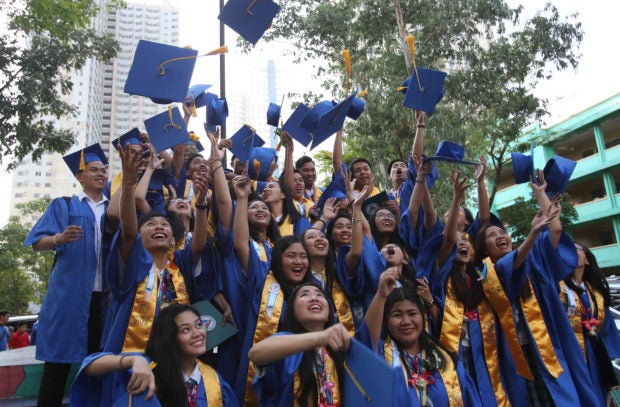 George Vincent Pagalilauan has not been receiving his school allowance since September last year. It’s not that his parents no longer want to support him but that the Grade 12 student has been earning his own keep over the past seven months, thanks in part to the training he got from the senior high school (SHS) program.

Before he even received his diploma on Friday, he had already landed a job at a fast-food restaurant in Quezon City where he completed the internship required for his cookery course.

Aside from supporting his studies at Ramon Magsaysay High School in Cubao, Quezon City, and meeting his personal needs, 18-year-old Pagalilauan used his earnings to purchase a motorcycle for his daily commute.

The Department of Education (DepEd) envisioned the SHS program to produce graduates prepared for higher education and capable of starting their own businesses or land a job even without a college degree.

It is part of the K-12 enhanced basic education program legislated in 2013 to “create a functional basic education system that will develop productive and responsible citizens equipped with the essential competencies, skills and values for both lifelong learning and employment.”

Though Pagalilauan had found a job long before he graduated, the same could not be guaranteed for all the close to 480,000 who finished the SHS program’s technical-vocational-livelihood (TVL) track like him.

Those who completed the TVL track are among the more than 1.2 million pioneer graduates of the new education reform program, which includes three other tracks—academic, arts and design, and sports.

A study by the advocacy group Philippine Business for Education (PBED) said that the first batch of SHS graduates possess “theoretically” 93 percent of the competencies suitable to the needs of the nation’s industries, such as critical thinking and problem-solving skills.

But a separate PBED study recently said only about 20 percent of 70 of the country’s leading companies across all sectors were inclined to hire senior high graduates.

According to PBED executive director Love Basillote, many companies accept only job applicants with at least two years of college education, which potentially excludes SHS graduates. This hiring policy explains the discrepancy between the graduates’ supposedly high competency and their low chances of getting a job, she said.

“What we want is for companies to hire based on competency and not on qualification. There are many jobs where you don’t need to have a college degree, such as in retail,” Basillote said.

The Philippine Chamber of Commerce and Industry’s Human Resources Development Foundation Inc. (PCCI HRDF) believes the hesitance to hire fresh graduates may be due to the absence of the necessary skills and training that industries need but not yet provided by the current SHS program.

“At the moment, we really have no confidence that they (SHS graduates) do have it,” said PCCI HRDF president Alberto Fenix.

Fenix said the 80 hours that SHS students were required to log at work were not enough for them to learn the rigors of the industry that they want to get into.

He said his group had proposed a “dual education” approach patterned from Germany that provides education and training in two locations—the school and  the workplace.

He said the PCCI has piloted the system in Batangas and Cavite provinces, but with 10 times more hours spent by students in the workplace.

At Laiya National High School in Batangas, students who went into the tech-voc track related to tourism and hospitality management did 800 hours of training over two years.

“[Through this setup,] they get work experience and also find out some of the things that are necessary [to land a job, such as] correct attitudes and values for the kind of work you’re going to be in,” Fenix said.

Though this year’s SHS graduates would have to compete with college graduates from the old curriculum, PCCI HRDF executive director Marlon Miña said that companies deciding whom to hire would still depend on whether an applicant had the competence and the qualification to do the job.

The advantage that SHS graduates may have over other college graduates would be the “longer immersion hours” that they had spent with the type of companies that they want to work for, Miña said.

Education Undersecretary Tonisito Umali said that while DepEd understood the employers’ concerns about graduates being work-ready, they should also realize that the much longer hours of training that they prefer students to undergo was “not the ideal scenario.”

“We can’t be heavy on work immersion and lack content,” he said.

“We understand [their concerns] but we’re talking about high school graduates, we’re talking about the minimum competencies or subjects—core, contextualized, specialized subjects—that they need to learn, and the work immersion component to apply what they’ve learned in the classroom to really make them ready for work,” Umali said.

He added that DepEd was willing to listen to suggestions and to see whether any proposal to improve the SHS program was feasible.

With the business sector’s concerns about the capabilities of SHS graduates, Assistant Education Secretary Nepomuceno Malaluan fears that DepEd would end up bearing full responsibility for every student who fails to land a job.

He said the failure to find employment was not always due to the graduate being unprepared for work but may be attributed to the realities in the labor front that both the government and the industries needed to address.

Malaluan said it was “not a certainty” that SHS students who opt not to go to college could find suitable jobs just because they had acquired the skills and competencies for particular types of work.

The 2017 Socioeconomic Report of the National Economic and Development Authority (Neda) said the national unemployment rate last year reached 5.7 percent, up from 5.5 percent in 2016. Youth unemployment also rose to 14.4 percent and the Duterte administration planned to cut it to 11 percent.

“Employment creation remains a challenge as there were around 663,243 net employment losses in 2017,” Neda said.

Fenix said there really were jobs available “but not enough people qualified to fill them.”

“But at the same time,” he added quickly, “there are not enough jobs for the number of people entering the work force.”