Hontiveros on Aguirre resignation: ‘Too late the hero for justice zero’ 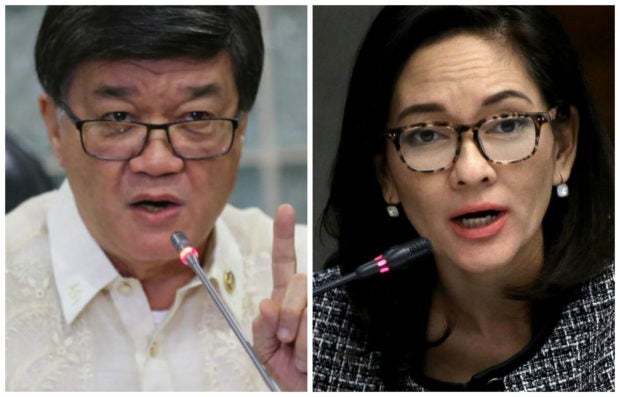 “Sorry, but too late the hero for ‘justice zero.’”

This was how Senator Risa Hontiveros reacted on Thursday to Justice Secretary Vitaliano III’s resignation, which she described a “hollow gesture.”

“The damage is done. By being allowed to stay in his post for the longest time, Mr. Aguirre turned the justice department into a leading purveyor of fake news, a manufacturer of fake legal cases to harass the opposition, and a refuge for drug lords, plunderers and other high-profile criminals,” Hontiveros said in a statement.

“Our justice system is now in shambles, with more and more people trusting it less and less. Mr. Aguirre’s resignation is a hollow gesture. Sorry, but too late the hero for ‘justice zero,’” she added.

But even Duterte’s acceptance of the resignation did not also sit well with the senator, saying the move absolves Aguirre from accountability and “amounts to little more than a sorry attempt on the part of the President to save face despite Aguirre’s repeated fiascos.”

She, however, considered Aguirre’s resignation a “clear victory against injustice and impunity.”

“The real heroes are the brave Filipinos who weighed Mr. Aguirre on the scales of justice, found him wanting and exacted accountability,” Hontiveros said.

“I urge the public to continue to exact accountability from this administration and closely follow the Executive branch’s process of appointing a new DOJ chief. We need to build on this victory to fully rehabilitate our justice system and restore the people’s confidence in our democratic institutions,” she added.

Hontiveros has been calling for Aguirre’s resignation after she exposed the latter’s alleged plot against her as shown in his text messages inadvertently captured by photographers while he was attending a Senate hearing in September last year.

The two have exchanged filing of cases against each other. /jpv

Read Next
Duterte names Menardo Guevarra as justice secretary
EDITORS' PICK
High inflation: Your P1 is now worth only 87 centavos
UK’s Boris Johnson will resign, BBC reports
Geek out at TOYCON 2022 powered by Smart Signature
House energy committee chair Arroyo bats for cheap electricity
High-risk pregnancy: Reducing your risk is in your hands
Unemployment rate up to 6% in May
MOST READ
Suspect in grisly killing of missing woman in Bulacan arrested
Hong Kong suspends flight bans as it eases COVID-19 rules
Kim Atienza’s daughter flaunts bikini body in response to critics of her ‘revealing photos’
Cop slain in Isabela ambush
Don't miss out on the latest news and information.