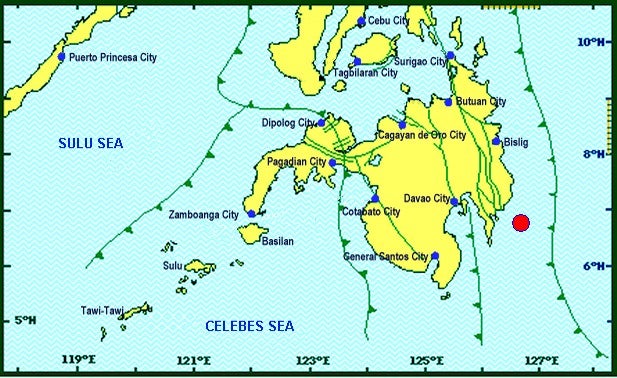 A  6.0-magnitude earthquake jolted Tarragona town in Davao Oriental on Thursday, the Philippine Institute of Volcanology and Seismology (Phivolcs) reported.

The earthquake of tectonic origin struck the area at 11:53 a.m., according to a Phivolcs bulletin issued at 12:45 p.m.

Phivolcs has warned the public of aftershocks but said that there was no expected damage.

Phivolcs said the depth of the quake reached 27 kilometers.       /muf

Read Next
Cops nab 3 ‘pushers’ in Lucena drug buy-busts
EDITORS' PICK
Geek out at TOYCON 2022 powered by Smart Signature
UK’s Boris Johnson will resign, BBC reports
High inflation: Your P1 is now worth only 87 centavos
High-risk pregnancy: Reducing your risk is in your hands
Unemployment rate up to 6% in May
House energy committee chair Arroyo bats for cheap electricity
MOST READ
Suspect in grisly killing of missing woman in Bulacan arrested
Kim Atienza’s daughter flaunts bikini body in response to critics of her ‘revealing photos’
Cop slain in Isabela ambush
FDA probes popular Filipino noodle brand for ‘high level of ethylene oxide’
Don't miss out on the latest news and information.