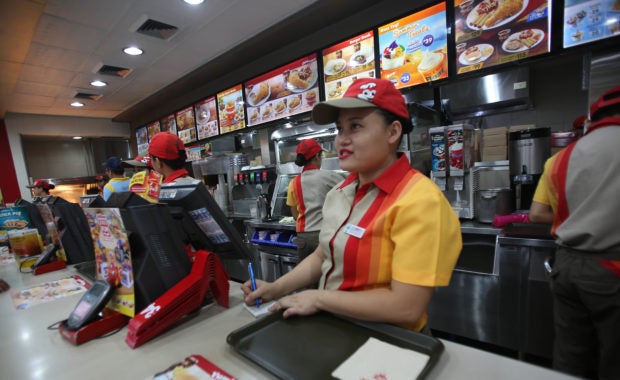 REGULARIZATION The latest directive of the Department of Labor and Employment will
benefit employees hired as contractuals by Jollibee, including those in this branch of the giant fast-food chain along Katipunan Road in Quezon City. —JOAN BONDOC

In an order that rattled the country’s business community but hailed by labor groups, the Metro Manila office of the Department of Labor and Employment (Dole) on Wednesday directed fast-food giant Jollibee Foods Corp. (JFC) and one of its subsidiaries, Burger King, to regularize more than 7,000 of their workers.

The office of Labor Regional Director Henry John Jalbuena reported to Undersecretary Joel Maglunsod that it had ordered Jollibee to regularize 6,482 workers deployed by two of its contractors, according to a Dole statement on Wednesday.

A similar compliance order was also issued to Perf Restaurant, also known as Burger King, to regularize 704 workers deployed by three of its contractors.

In a statement, Jollibee said it would appeal the order.

The reports on the order sent Jollibee shares closing down almost 4 percent.

The Dole order, however, will benefit only Jollibee and Burger King workers in Metro Manila. There was no immediate word on whether other Dole regional offices had issued the same order in their jurisdictions.

Employers prefer contractualization to regularization of their work force to reduce labor cost, but the hiring scheme denies security of tenure to workers.

Proponents of contractualization say the scheme is necessary because not all workers are needed the whole year, especially during slack business periods. But seasonal work or during a temporary surge in business would require additional workers.

Jollibee said it “remains committed to complying with the law and Department Order No. 174, which allow contracting arrangements with legitimate service providers.”

“In compliance with regulations, we only deal with reputable service contractors that had been duly accredited and registered with Dole. We have been cooperating and will continue to cooperate with Dole,” it said.

The head of the Philippine Chamber of Commerce and Industry (PCCI), the country’s largest business group, questioned the validity of the order, saying it should have been issued by the labor secretary himself.

“The regional director can only recommend,” PCCI president Ma. Alegria Sibal-Limjoco said in a text message to the Inquirer.

“Once such recommendation is formally made to the labor secretary, the affected company can have a platform to appeal and explain their side,” she added.

John Forbes, senior adviser for the American Chamber of Commerce of the Philippines, said contract workers played an important role in a modern economy.

“Companies should not be forced to make every employee a regular worker, but nor should companies fail to regularize employees who perform regular work over a long period of time and who qualify for a permanent job,” he told the Inquirer.

The president of the European Chamber of Commerce of the Philippines said his group supported the protection of labor rights and fair employment but “there must be careful evaluation of the short, medium and long term effects” of such an order from Dole.

“We are hopeful that both sides will come to a fair and equitable solution for all,” Guenter Taus said in a text message to the Inquirer.

Five other Jollibee contractors were ordered to return P4,137,158.15 in unlawful wage deductions, bonds, donations, shares and other illegal payments collected from 412 workers.

Leading the list of liable contractors is Citiwide Basic Commodities and Manpower Services Inc. with a total financial obligation of P1,853,578 to 40 workers for refunds on cash bonds for motorcycle rentals and unpaid service incentive leaves and holiday pay.

Generation One Resource Service and Multi-Purpose Cooperative was ordered to refund share capital, cooperative shares, membership fees and “damayan” fund and to compensate the unpaid holiday pay of 287 workers for a total amount of P1,180,363.15.

The Dole directed the Integral Care Formation Service Cooperative to return P440,300 to 24 workers from whom it had collected cooperative shares and payments for uniforms.

Toptrend Services Corp. was ordered to refund a total of P464,012 to 47 workers for motorcycle rentals. MetroGuards Security Agency Corp. was told to return donations and reimburse the unpaid holiday pay of 14 workers amounting to P199,905.

The Dole said it would continue inspections of popular food chains in the country in line with its crackdown on illegal labor contractualization practices.

It has set schedules to inspect McDonald’s and KFC restaurants to ensure their compliance with labor laws.

McDonald’s Philippines does not practice contractualization and has not used the services of manpower agencies since it started operations in 1981, according to Adi Timbol-Hernandez, the company’s senior communications manager.

Maglunsod said the department would inspect fast-food chains in other regions as part of its “relentless campaign to stop illegal work contractualization practices.”

Trade Union Congress of the Philippines president Raymond Mendoza said both Jollibee and Burger King must immediately comply with the order to regularize their workers.

“These workers are undertaking tasks which are directly related to the main business of these fast-food chains and working under the supervision of Jollibee and Burger King,” Mendoza said.

Julius Cainglet of the Federation of Free Workers (FFW) welcomed the Dole order as “very good news, if true.”

He said the FFW was willing to help Dole to monitor compliance to the order by Jollibee and Burger King.

In 2016, the the fast-food giant had 978 Jollibee stores nationwide, more than half of them company-operated and the rest under franchise. It also had 35 stores in the United States, 84 in Vietnam, 26 in the Middle East, 14 in Brunei, four in Singapore, three in Hong Kong and one in Canada.

In the same year, it had about 12,000 permanent and contractual employees.  —WITH A REPORT FROM STEPHEN C. CANIVEL