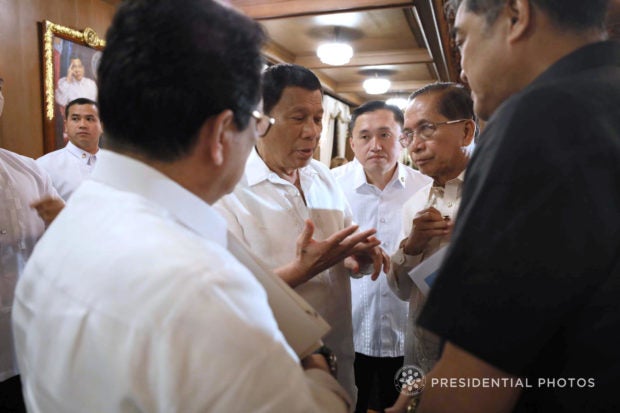 President Rodrigo Roa Duterte gives his advice to Labor and Employment Secretary Silvestre Bello III, Special Assistant to the President Christopher Lawrence Go and Presidential Adviser on the Peace Process Jesus Dureza prior to the start of the 24th Cabinet Meeting at the Malacañang Palace. ACE MORANDANTE/PRESIDENTIAL PHOTO

President Duterte Rodrigo Duterte on Wednesday ordered Peace Secretary Jesus Dureza to work on the resumption of peace talks between the government and the communist rebels.

The President made the order during the 24th Cabinet meeting in Malacañang, a day after he said he would want to resume the stalled talks with the rebels.

“President Duterte directed during the Cabinet meeting today to work on the resumption of peace talks with the CPP-NPA-NDF with clear instructions on the importance of forging a ceasefire agreement to stop mutual attacks and fighting while talks are underway,” Dureza said in a statement.

The President said: “Let’s give this another last chance.”

According to Dureza, the Presiden also committed to provide support, if necessary, in replacement of the “revolutionary tax” that he asked be stopped. /atm