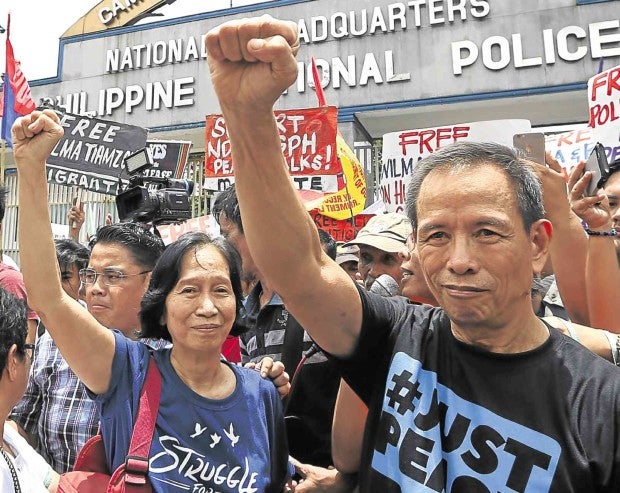 In this file photo, Communist Party of the Philippines leaders (right and left) Benito Tiamzon and his wife, Wilma, raise clenched fists as they walk out of police detention on August 19, 2016, to join rebel negotiators in peace talks in Norway. PHILIPPINE DAILY INQUIRER / NIÑO JESUS ORBETA

PNP spokesperson Chief Supt. John Bulalacao said efforts by police intelligence operatives to locate the Tiamzons will continue even after President Rodrigo Duterte has declared that talks with the Communist Party of the Philippines (CPP) will resume.

Duterte on Tuesday said that he would resume talks with the CPP for as long as its armed wing, the New People’s Army (NPA), stops its series of attacks and the collection of revolutionary taxes from businesses.

The President’s pronouncement came days after the NPA on Holy Week torched some P65-million worth of construction equipment in at least two far-flung villages in Davao City. The attack coincided with the NPA’s 49th founding anniversary.

It was the first time in recent months that Duterte appeared to be cordial with the communists, which he referred to in his speech as “friends.”

Security forces have been tracking down the Tiamzons after the Manila Regional Trial Court Branch 32 in January cancelled their bail in connection with a multiple murder case.

The court granted the Department of Justice’s earlier motion for recommitment and cancellation of bail following the collapse of the peace talks between the government and the National Democratic Front (NDF) late last year.

The Tiamzons were released after posting bail in August 2016 in time for the resumption of the peace talks between the government and the NDF.     /muf