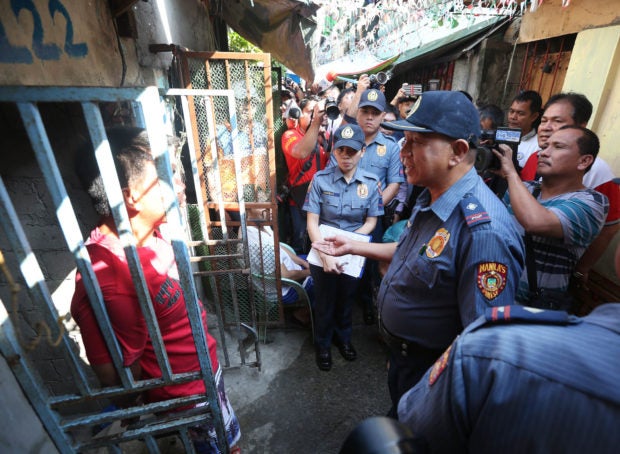 Tokhang Resumption- Members of the Manila Police District station1 invites several men on the drug watchlist to to their local barangays for questioning, during the resumption of Tokhang, in Bgy. 122 Bukid Tondo , Manila on monday. INQUIRER/ MARIANNE BERMUDEZ

The Supreme Court on Tuesday directed Solicitor General Jose Calida to make good on his promise to submit the Philippine National Police investigation reports on the killing of more than 4,000 drug suspects in President Rodrigo Duterte’s brutal war on drugs.

Voting unanimously, the 12 justices who attended the first of their annual summer full-court sessions in Baguio City rejected Calida’s appeal to rescind their Dec. 5, 2017, order requiring the submission of the official PNP reports on the killings of drug suspects during the implementation of “Oplan Tokhang.”

“[T]he court denied [Calida’s] motion for reconsideration of the court’s order … and directed [the] respondents to comply with the said order by submitting the required reports within a period of 15 days from notice,” the tribunal said in a statement.

The justices stood firm on their previous instruction to Calida and the PNP to provide them with documents containing the names, addresses, police operational plans and other important information on Oplan Tokhang operations from July 1, 2016, to Nov. 30, 2017.

There was no immediate comment from Calida or the PNP.

The Center for International Law (Centerlaw), which represents the two groups of petitioners—families of slain drug suspects—who challenged the legality of the war on drugs and sought protection from the court against the PNP, thanked the justices for their decision.

“We are fortified by this triumph of the rule of law. The Supreme Court has demonstrated with this initial order that it will perform its role as our people’s beacon and bastion of justice,” Centerlaw said in a statement.

Senior Associate Justice Antonio Carpio had also required Calida to submit the names of all police officers who participated in the operations and of the PNP crime scene investigators who processed the bodies and gathered evidence where the killings took place.

“The records must be there because these are supposedly legitimate drug operations,” Carpio told Calida last December before concluding oral arguments on the two petitions questioning the legality of the President’s drug war.

“I want the names, addresses and all these reports. You must know them because you are investigating them,” Carpio said.

“Even the date, time and place of the killings,” Carpio said.

The court also asked for a list of suspected drug lords who had been “neutralized” — killed or captured — that would also show what drugs they were accused of trading.

Calida initially agreed to comply with the tribunal’s order within 60 days but he eventually opposed it, invoking national security “after reviewing relevant laws and jurisprudence.”

“The production of documents required … involve information and other sensitive matters that in the long run will have an undeniable effect on national security,” Calida argued.

“[I]t could spell the success or failure of follow-up operations of [the] police and other law enforcement bodies, aside from endangering the lives of those on the list as well as those already in custody,” he said.

Clearance from the President

PNP Director General Ronald “Bato” dela Rosa said last year the records could not be released without clearance from the President.

The President, Dela Rosa and 10 other officials are facing a complaint for crimes against humanity in the International Criminal Court (ICC) in The Hague over the drug war killings.

More than 4,000 people have been killed by police since Mr. Duterte launched his campaign against illegal drugs on July 1, 2016.

Thousands of others have been killed by unknown assailants in what the PNP calls deaths under investigation.

The killings continued, with seven people gunned down by police in 505 operations across the country during Holy Week.

“There was no letup in our antidrug operations during the Lenten season,” Dela Rosa told reporters on Monday.

Of the seven fatalities, four were killed in Central Luzon and one each in Southern Tagalog, South-Central Mindanao and the Autonomous Region in Muslim Mindanao, he said. —With reports from Nikko Dizon and Karlston Lapniten