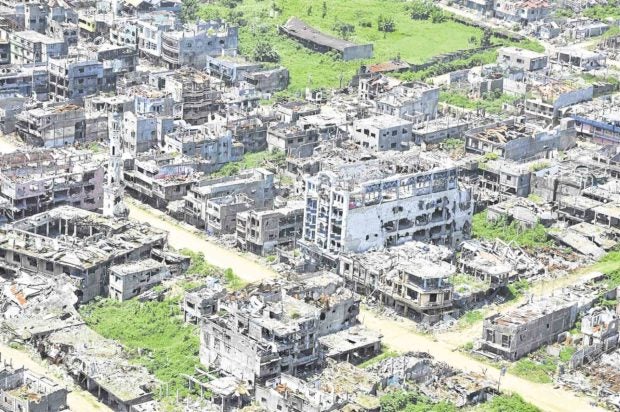 A consortium of Chinese and Filipino companies has been chosen by the government as the potential developer to lead the rebuilding of war-torn Marawi City, an official of the Task Force Bangon Marawi (TFBM) said.

In a telephone interview on Tuesday, Eduardo del Rosario, TFBM chair, said the task force would hold negotiations with the Bangon Marawi Consortium (BMC), composed of five Chinese and four Filipino firms, to determine the terms of reference, hammer out the details of the reconstruction program and set the final project cost.

Most of Marawi City was reduced to rubble by five months of fighting between government forces and Islamic State-allied militants who laid siege to the city on May 23 last year. More than 200,000 people were displaced by the conflict, forcing them to stay in evacuation centers in the provinces of Lanao del Sur and Lanao del Norte.

The war in Marawi, which ended in October last year, prompted President Rodrigo Duterte to put the entire island of Mindanao under martial law. The proclamation has been extended to the end of this year.

Del Rosario assured that the TFBM would conduct further consultations with Marawi residents regarding the city’s reconstruction.

But a civil society leader in Marawi warned groups interested to invest in the city that residents would fight for their rights if they would be deprived of their ancestral lands.

“We warn all those private developers and business groups interested to invest in the main affected area of Marawi, who will replace us from where our houses stand, that they will face legal repercussions if they push through with the plan without our consent or approval,” said Drieza Lininding, chair of the Moro Consensus Group.

Should the government and BMC come to a final agreement, the latter would be designated as the “original proponent” of the reconstruction project, whose proposal could be matched by other interested developers, Del Rosario said.

“If we agree on the cost and there is a successful negotiation, it would be the original proponent and there would be a Swiss challenge,” he said.

BMC proposed to undertake the reconstruction at a cost of P17.1 billion, but Del Rosario said this could still go up depending on the final details of the rehabilitation project.

Del Rosario said the original proponent could be chosen by the end of April, after which the task force would publish the proposal and begin the Swiss challenge.

The contract could be awarded by June, and after this, the work would begin in three days, he said.

Lininding condemned TFBM for supposedly lying to residents of Marawi.

“Now, their plan has been unveiled—it is to flatten [Marawi] and evict us from our ancestral homes and lands, which they plan to give to private developers,” he said.

“Presenting the plan to a few chosen residents does not [constitute] consultation,” he added.

But Assistant Secretary Kristoffer James Purisima, TFBM spokesperson, said allegations of lack of consultation with residents had “no factual basis.” —WITH REPORTS FROM JIGGER JERUSALEM AND NIKKO DIZON