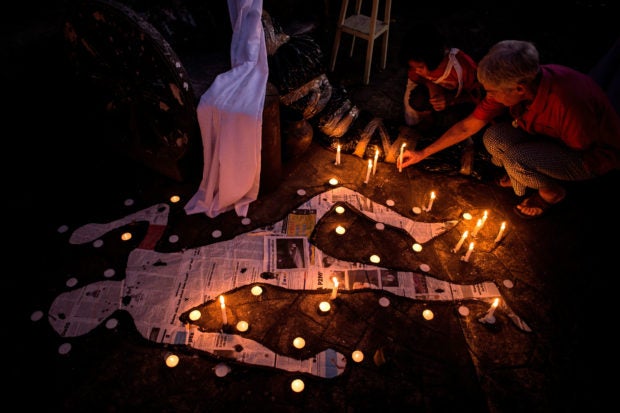 A catholic devotee and her grandchild light a candle beside mock chalk figure representing an extra judicial killing victim during a prayer rally condemning the government’s war on drugs in Manila. File photo AP / NOEL CELIS

The Supreme Court (SC) gave the Executive Department, through the Office of the Solicitor General, 15 days to submit details of the 3,806 killed under legitimate police operations from July 1, 2016 to Nov. 30, 2017 in connection with the government’s war on drugs.

During Tuesday’s en banc in Baguio City, the high court denied the motion for reconsideration submitted by Solicitor General Jose Calida to reconsider its Dec. 5, 2017 order on the submission of records related to President Rodrigo Duterte’s war on drugs.

“The Court denied the Solicitor General’s motion for reconsideration of the court’s order dated 5 December 2017 and directed respondents to comply with the said order by submitting the required reports within a period of 15 days from notice,” the high court said.

In his motion for reconsideration, Calida told the high court that the order is “patently irrelevant.”

He said the SC cannot declare a law or ordinance as unconstitutional based on the abuses committed by its implementor.

“The criterion by which the validity of the statute or ordinance is to be measured is the essential basis for the exercise of power, and not a mere incidental result arising from its exertion. This is logical,” Calida said.

The order was issued by Senior Associate Justice, now acting Chief Justice Antonio Carpio following an oral argument in connection with the two consolidated petitions filed by the Center for International Law (CenterLaw) through lawyer Joel Butuyan on behalf of the residents of 26 barangays in San Andres Bukid, Manila City and the Free Legal Assistance Group (FLAG) led by lawyer Jose Manuel Diokno.

The high court wants the Office of the Solicitor General to submit the following:

On those “death under investigation,” the high court asked the submission of the following:

The high court also asked the government lawyers to submit the records of all buy-bust operations conducted in San Andres Bukid, the subject of one of the two petitions, the pre-operations plan and post-operations plan.