Cases to be filed vs local officials over Boracay violations 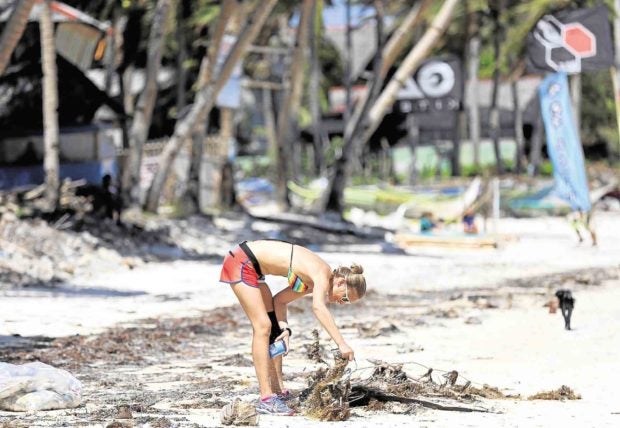 A foreign tourist helps pick up trash at a section of a beach on Boracay Island. (File photo by LYN RILLON / Philippine Daily Inquirer)

ILOILO CITY — The Department of the Interior and Local Government (DILG)is set to file administrative complaints before the Ombudsman against local officials governing Boracay Island for environmental and other violations on the island.

DILG Assistant Secretary Epimaco Densing III, chair of a 12-person special investigating team, said the complaint for serious neglect of duty would be possibly filed on or before April 14.

“We have completed the gathering of evidence and we are readying the filing of complaints,” Densing told the Inquirer.en

Asked who would be named respondents, Densing declined to elaborate but said they would likely include “many” officials of Malay town.

He said that aside from elected officials, the respondents would include those responsible for issuing building permits.

“They will be held liable for failure to uphold national and local laws,” Densing said.

Municipal officials have been blamed for the unregulated construction activities that have caused congestion and environmental problems on the island.

DILG officer-in-charge Eduardo Año earlier created the special investigating team to look into the conduct of the local officials, agencies or institutions and employees from 2008 to 2018.

In an earlier interview, Malay Mayor Ciceron Cawaling said officials were ready to face whatever complaints would be filed against them. But he insisted that they had fulfilled their duties based on their capacity and resources.

He said many of the problems of Boracay were beyond the resources of the municipality and needed national government intervention.

Densing said they qwew initially focusing on the collection and utilization of the P75 environmental fee charged to tourists visiting the island.

He said the local government had reported that it collected P91 million in environmental fees in 2017.

But Densing said this was inconsistent with the 2.1 million tourists whovisited the island last year which would translate to at least P150 million in environmental fees.

A municipal ordinance mandates the collection of the environmental fee which should be deposited in a trust fund and allocated “exclusively for environmental and tourism programs and projects” in Malay.

Densing said local officials could also be held liable for issuing building and business permits and licenses even before an Environmental Certificate of Compliance (ECC) is issued by the Department of Environment and Natural Resources.

An ECC certifies that a project or activity will not pose environmental hazards or damage and that its proponents are capable of implementing measures to protect the environment.

The investigation on local officials governing Boracay is part of efforts to crack down on environmental and other violations on the island.

A multi-agency task force has recommended to President Rodrigo Duterte to shut down the island to tourism activities for six months.

The President has yet to act on the recommendations. /atm