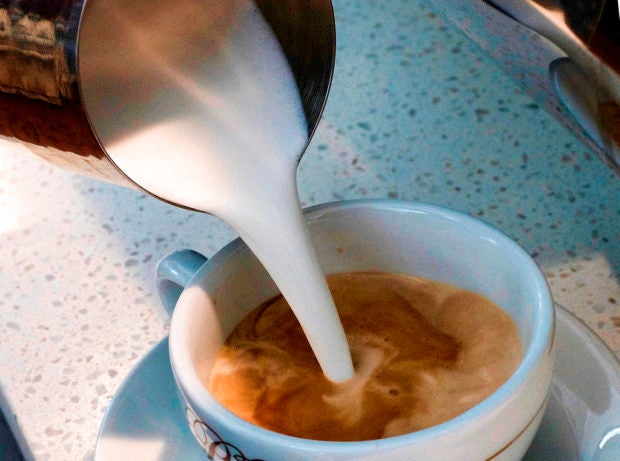 In this Sept. 22, 2017, file photo, a barista pours steamed milk in a coffee at a cafe in Los Angeles. Superior Court Judge Elihu Berle has ruled that California law requires coffee companies to carry an ominous cancer warning label because of a chemical produced in the roasting process. Judge Berle wrote in a proposed ruling Wednesday, March 28, 2018, that Starbucks and other coffee companies failed to show that the threat from a chemical compound produced in the roasting process was insignificant. At the center of the dispute is acrylamide, a carcinogen found in many cooked foods, that is produced during the roasting process. (AP Photo/Richard Vogel, File)

LOS ANGELES — A Los Angeles judge ruled that California law requires coffee companies to carry an ominous cancer-warning label because of a chemical produced in the roasting process.

Superior Court Judge Elihu Berle wrote in a proposed ruling on Wednesday that Starbucks and other coffee companies failed to show that the threat from the chemical was insignificant.

The Council for Education and Research on Toxics, a non-profit group, sued Starbucks and about 90 other companies, including grocery stores and retail shops, under a state law that requires warnings on a wide range of chemicals that can cause cancer. One of those chemicals is acrylamide, a carcinogen present in coffee.

The coffee industry had claimed the chemical was present at harmless levels and should be exempt from the law because it results naturally from the cooking process necessary to make the beans flavorful.

Lawyers for Starbucks, the lead defendant, and the National Coffee Association industry group did not immediately return phone messages or emails seeking comment.

The ruling came despite eased concerns in recent years about the possible dangers of coffee, with some studies finding health benefits.

In 2016, the International Agency for Research on Cancer — the cancer agency of the World Health Organization — moved coffee off its “possible carcinogen” list.

Studies indicate coffee is unlikely to cause breast, prostate or pancreatic cancer, and it seems to lower the risks for liver and uterine cancers, the agency said. Evidence is inadequate to determine its effect on dozens of other cancer types.

The California legal case has been brewing for eight years and is still not over. A third phase of trial will later determine any civil penalties that coffee companies must pay.

With potential penalties up to $2,500 per person exposed each day over eight years, that figure could be astronomical in a state with close to 40 million residents, though a massive figure is unlikely.

The lawsuit was brought under the Safe Drinking Water and Toxic Enforcement Act, passed by voters as Proposition 65 in 1986. It allows private citizens, advocacy groups, and attorneys to sue on behalf of the state and collect a portion of civil penalties.

The law has been credited with reducing chemicals that cause cancer and birth defects, such as lead in hair dyes, mercury in nasal sprays, and arsenic in bottled water. But it has also been widely criticized for abuses by lawyers shaking down businesses for quick settlements.

Atty. Raphael Metzger, who brought the lawsuit and drinks a few cups of coffee a day, said he wants the industry to remove the chemical from its process. Coffee companies have said that was not feasible and would make their product taste bad.

Metzger’s group brought a similar case later taken up by the state attorney general that resulted in potato-chip makers agreeing in 2008 to pay $3 million, and remove acrylamide from their products rather than post startling warnings that can be found throughout California and are largely ignored.

Parking garages, for example, post signs saying: “This area contains chemicals known to the state of California to cause cancer, birth defects, and other reproductive harm.”

Regulations adopted in recent years now require more specific warnings that list the chemical consumers may be exposed to, and list a website with more information. Parking garages, for example, will have to post that breathing air there exposes drivers to carbon, gas, and diesel exhaust, and that people should not linger longer than necessary.

Many coffee companies have already posted warnings that specifically say acrylamide is found in coffee and is among chemicals that cause cancer. However, many of those warnings are posted in places not easily visible, such as below the counter where cream and sugar are available.

In the first phase of the trial, Berle said the defense failed to present enough credible evidence to show there was no significant risk posed by acrylamide in coffee.

The law put the burden on the defense to show that the level of the chemical would not result in one excess case of cancer for every 100,000 people exposed. Berle said the epidemiology studies presented were inadequate to evaluate that risk.

Having failed to show there was no significant risk to drinking coffee, the second phase of trial let the industry put on a backup defense. It had to show that there should be a less strict level set for coffee because of health benefits from drinking it.

Berle said the coffee companies failed to show that.

The judge has given the defense several weeks to file objections to the proposed ruling before he makes it final. California judges can reverse their tentative rulings, but rarely do.

Nearly half of the defendants in the coffee case have settled at some point during the long legal process and agreed to post warnings, Metzger said. About 50 defendants remain.

Read Next
Suicide attack in eastern Libya, at least 8 killed – security officer
EDITORS' PICK
Do all the things you do, faster
Motorcycles, smartphones, and cash prizes up for grabs in TNT’s ‘Tuloy Ang Saya’ Raffle in Mindanao
House energy committee chair Arroyo bats for cheap electricity
NCR at increased COVID risk again
New PS-DBM director says DepEd laptop MOA ‘not legal’
House okays budget; ways to go in Senate
MOST READ
Robredo’s tarpaulin portrait at Palace just a ‘placeholder’
Shopee PH gets flak for getting Toni Gonzaga
Robredo supporter tackles elephant in room: No massive fraud in 2022 polls, surveys were just right
DepEd: We are in a crisis situation in education sector
Don't miss out on the latest news and information.