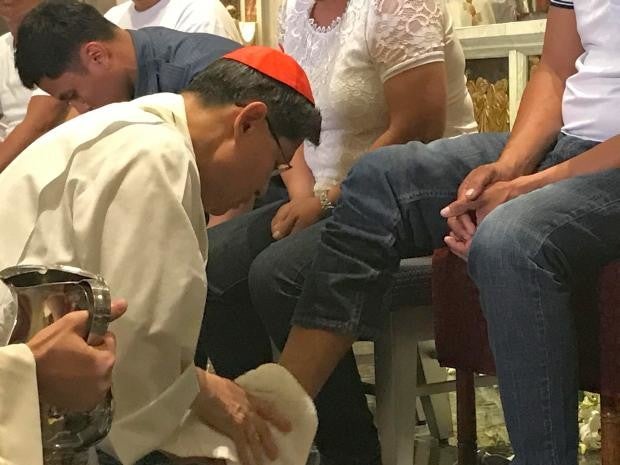 Fr. Teresito “Chito” Soganub will be among the 12 people whose feet will be washed by Manila Archbishop Luis Antonio Cardinal Tagle on Maundy Thursday.

The priest, who was held hostage for 116 days during the Marawi City siege, will join migrants, refugees, and other displaced people during the Mass at the Manila Cathedral.

According to a statement issued by the Manila Cathedral on Tuesday, Tagle will preside over the Evening Mass of the Lord’s Supper, which includes the ritual of “washing of the feet.” The Mass will start at 5 p.m. on Maundy Thursday, March 29.

The statement quoted Pope Francis’ New Year message in January, in which he urged Catholics to “embrace all those fleeing from war and hunger, or forced by discrimination, persecution, poverty and environmental degradation.”

“Our dear archbishop echoes this appeal in his Easter message: ‘By rising from the dead, Christ invites us to roll away the stones that are blocking our own hearts and imagination to share the journey with each other – in particular with the most vulnerable people, such as migrants’,” it said.

The ritual of washing of the feet is known as the “Mandatum,” and celebrates the Last Supper of Jesus Christ, during which he washed the feet of his 12 apostles.

The rite comes after the homily and Gospel reading, with the priest pouring water over the feet of selected persons and then drying those feet using a towel.

Soganub, a priest of the Prelature of Marawi, was chosen as “he still believes in promoting understanding and peace among peoples” even after he was held hostage by the Maute terror group.

Aside from Soganub, the 11 other individuals whose feet would be washed by Tagle are: