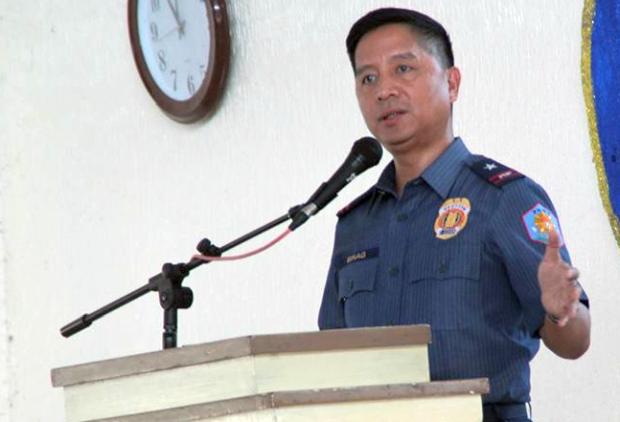 Chief Supt. Cesar Hawthorne Binag, Western Visayas police chief, ordered the administrative relief of the eight police officers to pave way for an impartial and in-depth investigation in the killing of two suspects. (Photo from the Facebook page of the Western Visayas Police Regional Office)

ILOILO CITY — The Western Visayas Police Regional Office (PRO 6) relieved on Sunday eight police officers amid an investigation over the March 22 killing of two men who allegedly attacked and a took police officer’s gun and wallet in a bar.

One of those relieved was Senior Insp. Marc Dado, officer-in-charge of the San Jose Municipal Police Station, according to Supt. Gilbert Gorero, PRO 6 spokesperson.

Dado was reassigned to the regional public holding and accounting unit at Camp Martin Delgado in Iloilo City, while the other officers were transferred to the headquarters of the Antique Provincial Police Office in San Jose, the provincial capital.

Chief Supt. Cesar Hawthorne Binag, chief of PRO 6, ordered the administrative relief of the officers to pave way for an impartial and in-depth investigation, Gorero said.

He said Binag issued the order after an investigating team from the regional police office talked about the case with residents, church leaders, and San Jose Mayor Elmer Untaran.

The San Jose Municipal Police Station had alleged that Kenneth Henry Tabaranggao and Vidal Allado died in a shootout with police officers in Barangay Madrangca in San Jose.

The two men allegedly mauled PO2 Dennis Corcolla and took his gun and wallet in a bar before the shootout.

A team of officers led by Dado pursued the two men, but they allegedly fired at them when told to surrender. The officers seized two handguns and sachets of suspected crystal meth (shabu) from the slain suspects.

But relatives of the suspects said that Corcolla was unruly at the bar, which led to the scuffle.

The two men were allegedly on their way to the police station to turn over Colcolla’s firearms.

Questions over the circumstances of the shooting also cropped up because of to bruises on the faces and bodies of the two suspects.

Mayor Untaran said he requested an investigation of the incident amid “public perception” doubting the police report.

“We are a peaceful town and many sectors are alarmed,” he told the Inquirer in a telephone interview. /atm