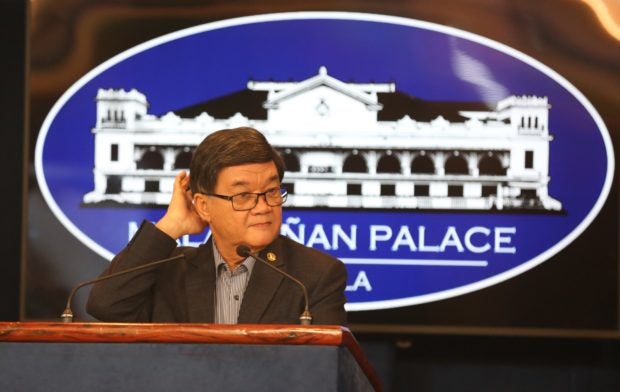 Justice Secretary Vitaliano Aguirre II on Monday said that it was “not correct” to investigate prosecutors who dismissed the case against drug personalities led by Peter Lim and Kerwin Espinosa and Peter Co but “extraordinary times need extraordinary measures.”

In his speech during Monday’s flag ceremony at the Department of Justice, Aguirre apologized to the prosecutors for ordering the National Bureau of Investigation (NBI) to investigate possible malfeasance, misfeasance or nonfeasance in clearing Lim, Espinosa, Co and the others.

Aguirre said the prosecutors had asked him if he would have them investigated every time they issued resolutions against government’s advocacies.

Aguirre said he told the prosecutors that “it is not correct for me to do that [order an investigation].”

However, he said, “because of the seriousness, uproar, outrage by the ignorant ay napalaki ito… I apologize to the prosecutors for causing the investigation because extraordinary times or extraordinary incidents call for extraordinary solutions.”

He said the investigation was for the protection, not only of the Office of the Secretary of Justice but also of the prosecutors.

“Para lang maipakita natin sa kinauukulan, sa ating mga kababayan na wala tayong tinatago dito [To show the authorities, to our countrymen that we are not hiding anything …] and that you, the prosecutors [have] decided this case in accordance with the rules, in accordance with our proceedings,” Aguirre said.

The prosecutors said the police relied on the testimony of Adorco which were inconsistent based on his three affidavits. They said the police failed to submit additional evidence to corroborate or support the claims of Adorco.

Aguirre earlier said the dismissal of the case should be a wakeup call to the police to submit complete evidence before filing a complaint with the prosecutors. /cbb

READ: How the landmark drug case was ‘lost’