MOGPOG, Marinduque — The sleepy island province of Marinduque comes to life during Holy Week, with thousands of local visitors and foreign tourists coming down to see one of the Philippines’ oldest religious traditions.

To friends Cedij Montemayor and Jethro Magdalita, both 19, Holy Week is something to look forward to, not only because it ushers in the grand summer vacation but also because they get to wear their Morion costumes, which include wooden masks depicting scowling Roman soldiers, breastplates, capes and sandals, and carry their props—swords, shields and spears.

Moriones can be likened to the modern-day cosplay (costume play), where people in Marinduque, an island province composed of six towns, parade in costumes as Roman soldiers, the most recognizable characters in the passion story. 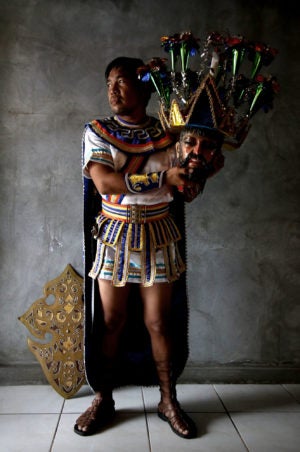 PLAYING MORION Ronald Ringor, 40, a penitent for 18 years, says people like him who play Morion in Mogpog are encouraged to undergo Church recollection before the Holy Week. INQUIRER PHOTO / RICHARD A. REYES

People, however, believe that taking part in Moriones is an act of penance or a way of thanking God for his blessings.

He first wore a Morion costume and joined the tradition when he was 9 years old. “It’s a vow and also so I wouldn’t be scared of the Morion anymore,” he said.

Like his friend, Magdalita is the only member of his family who has been taking part in Moriones. “[At school] you’re popular when you’re a Morion. It adds [brownie] points,” he quipped.

The two came here from Buenavista town, about 60 kilometers from Mogpog, to pick up a new Morion mask—one with big sharp eyes, thick beard and a villainous scowl. They ordered it from Eric Morales, a fourth-generation mask maker who inherited the craft from his father, Renato or “Ka Atong,” 74, who died last week.

In a shack surrounded by coconut trees at Barangay Anapog-Sibucao, Morales, 39, works day and night to finish several masks, especially those intended to be worn this Holy Week. His wife takes charge of sticking the eyelashes, made from human hair, while his brother-in-law helps with the painting and final touches.

“I started [making masks] when I was in Grade 6 just by watching how my father made them,” said Morales, a drafting undergraduate.

Bishop Maralit said that while Moriones had become a brand synonymous with Marinduque, “[it] speaks of many traditions.”

The Roman soldiers at the foot of the cross, he said, are constant characters in depictions of the passion of Jesus. “[But] traditions evolved and the concentration [shifted] from Jesus to the Roman soldiers [because they] have become attractive and touristic,” he added.

In Marinduque, a highlight of the Lenten tradition is the “pugutan,” a reenactment of the beheading of Longinus—the Roman soldier at the foot of the cross who spears the side of Jesus in the Fourth Gospel—on Easter Sunday.

The festival draws about 50,000 tourists to the island, according to Marinduque tourism officer Dindo Asuncion.

Lent is peak season for beach resorts, restaurants and local businesses in the province.

But “festival” is a “misnomer” for Moriones, Asuncion said.

“It’s a folk religious practice. It’s a devotion anchored on Christ’s passion. You don’t come here to be merry. It’s not meant to be a festival and it will never be,” he said.

Maralit said the Church was taking the role of reminding people of the religious origin of Moriones—penitence and penance.

“[Moriones] is not really a festival because it’s penitential,” he said.

Maralit said the Church was concerned that if Moriones “becomes too festive, we might lose the real [meaning] of Moriones of Marinduque, [and] we lose our identity.”

To preserve tradition, the provincial government has nominated Moriones to become “an intangible cultural heritage” under the United Nations Educational, Scientific and Cultural Organization.

In Mogpog, the local government passed a resolution in February last year (Mogpog Resolution No. 29-2017) penalizing the “indiscriminate display” of the Morion mask and costumes in private parties and events or government programs not related to the Lenten observance.

The resolution encourages penitents “to deepen their spirituality [and] not merely [wear the mask] for tourism purposes.”

Church and local officials discourage the use of “festival” and refer to the play by its traditional name “Moryonan.”

In the past, people took part in the penitential rites by covering their faces with charcoal and wearing costumes made from seashells and coconuts.

The rites have evolved into what people today know as a parade of fierce-looking Roman soldiers.

But the face of Moriones, the mask, remains generally a product of the skillful hands of generations of homegrown artisans, not machines.

Carving the mask out of a chunk of “santol” or “dapdap” wood, then chiseling the face down to last wrinkle is tedious work. It takes Morales three days to finish a mask, complete with the helmet and crest, which is made of horse hair.

In recent years, some mask makers started using papier-mache concrete mold to produce Morion masks that they could sell as souvenirs at lower prices.

Morales wears his own mask during the Moriones with his son, Jearcen, 10, in tow. At the parade, “I would tell him: ‘Don’t be scared, you’re a son of a Morion maker. Those are Papa’s works,’” he said.

Mogpog distinguishes itself from the rest of Marinduque with its traditional “bulaklakan” helmet for Moriones.

The helmet, former Mayor Senen Livelo Jr. said, has tinfoil flowers on the top. The number of flowers stands for the number of years the penance has been going on or the number of a penitent’s wishes, he said.

“Once your wish is granted, say a child you’ve been praying for, you take one flower out,” Livelo said.

In earlier times, according to local accounts, a penitent who failed to fulfill his vow was buried with his Morion costume for him to carry on with his penance in the afterlife.

Hundreds take part in Moriones, among them women and even children as young as 2.

According to Ronald Ringor, 40, a penitent for 18 years, people playing Morion in Mogpog are encouraged to undergo Church recollection prior to Holy Week.

“It’s really difficult and hot under the mask,” Ringor said. “But if you think of Jesus’ sacrifices, ours is nothing.”

Others, especially elderly penitents, wear their masks almost throughout Lent and take them off only to eat or drink.

But just the same, Maralit said the Church saw Moriones as a “gesture” of faith.

“The principle of the [Morion] mask is [to make] no distinction,” he said. “When you wear the mask, you’re a penitent. It doesn’t matter if you’re rich or poor, old [or] young … because you’re all the same under the mask with the same principle of trying to do penance,” he added. —With reports from Mayda Lagran and Jofel Joyce Lancion