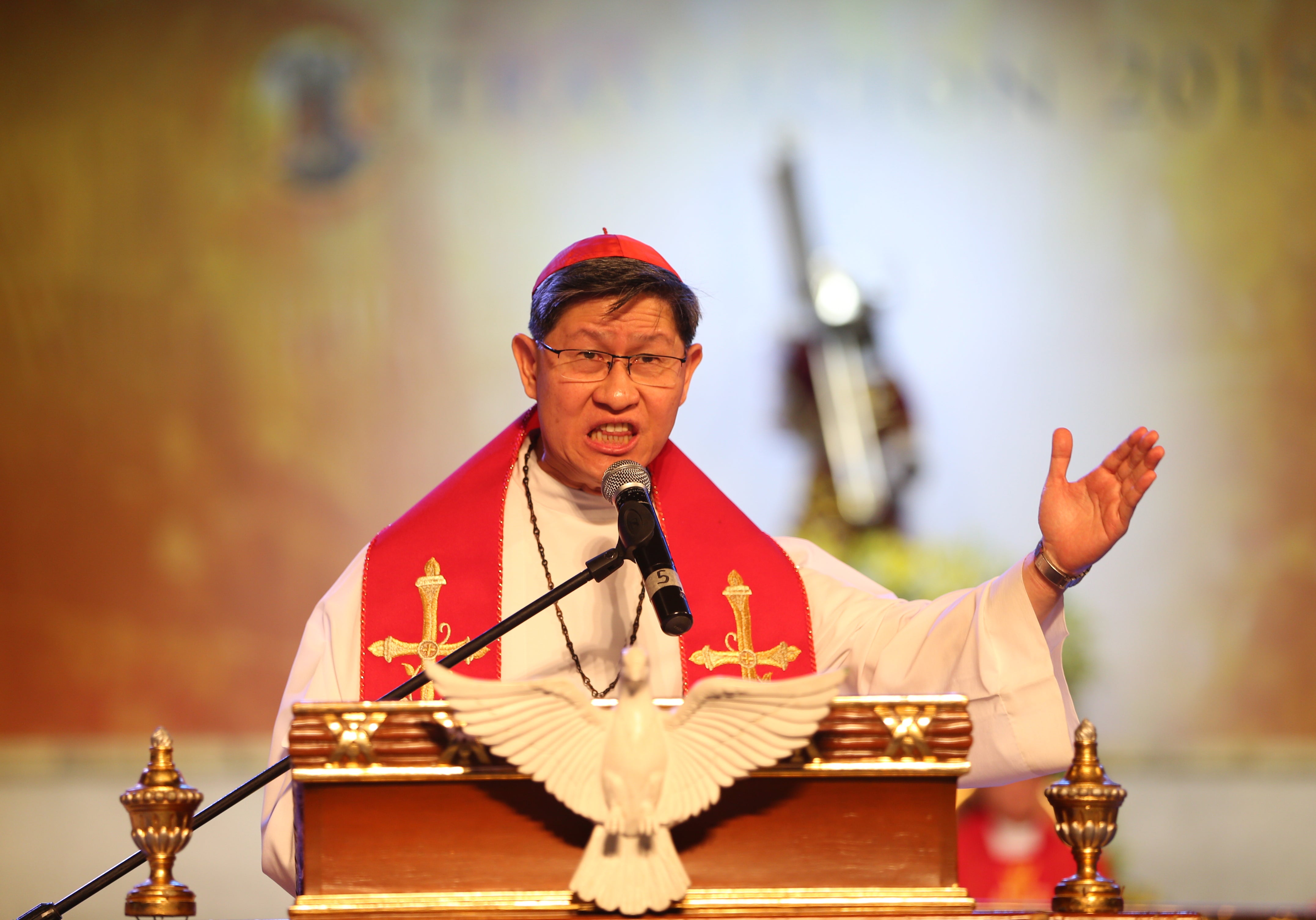 Manila Archbishop Luis Antonio Cardinal Tagle urged the Catholic faithful to make use of the Holy Week observance to get to know Jesus more deeply as he warned them against arrogant “kings” who use violence to assert their authority over the weak.

“This Holy Week, let us focus on Jesus. Let us look and listen to Him to get to know Him again. It’s important that we again deepen our understanding of Jesus,” Tagle said in his homily for Palm Sunday at the Manila Cathedral in Intramuros, Manila.

“Who is Jesus? Who is He that we follow? Why did He come and what is His mission?” he asked.

Before the Mass, Tagle led the blessing of the palm fronds at Plaza Roma as he made his way inside the Manila Cathedral in a procession reenacting Jesus’ triumphant entry into Jerusalem.

Palm Sunday signals the start of Holy Week, the year’s most somber period of prayer, penitence and reflection on the ultimate sacrifice of Jesus Christ.

In the Philippines, young coconut leaves are woven into decorative shapes to mimic the palm and olive fronds used in the Bible.

“In our world today, we have many kings full of arrogance, lacking in humility. In our time, many of us follow kings who use violence, arms, threats…clearly showing lack of understanding and solidarity with the weak,” Tagle said in the vernacular.

“Pilate is asking us: who will you choose—the Barrabases of today or Jesus the King?” Tagle asked.

In the Bible, Barrabas was a prisoner who was chosen by the Jews over Jesus Christ to be released by Pontius Pilate.

Tagle urged the faithful to reflect “Is Jesus really my king? Am I ready to accept and follow him?”

“In the eyes of the world, he is a king without strength and power. Where is his strength? Where is his power? In the first reading, we saw his strength, strength that came from trust in God. Our king does not trust in violence or arms, bullets and guns. Our king trusts in God,” he said.

The cardinal also encouraged the faithful to imitate Christ’s humility, stressing that Holy Week is about humility.

Reflecting on the day’s second reading, which recounts how Jesus emptied himself and became human, Tagle said that God’s way is no other than humility.

“He is powerful as the son of God, but he chose to strip himself of power. He did not cling on to this power. Why? So that he may be one with us. He became humble. That is his strength, his power: solidarity with the weak and sinners,” he said.

“The serene dignity and silence of the person who trusts in God and who is full solidarity with sinful humanity, that is true authority. That is our true king. That is the king that will save the world,” Tagle said.

“In truth, Pilate is no match for Jesus. But our King need not defend Himself. His personality shows He has full trust in God and love for us. That is the true king. That is dignity. That is power,” he added. /je