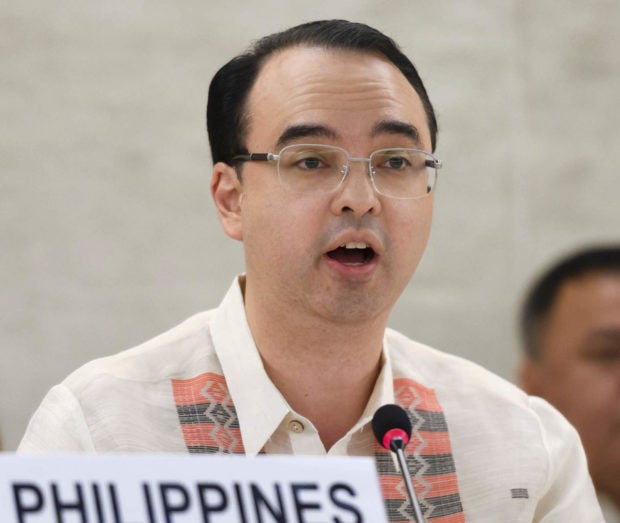 Foreign Secretary Alan Cayetano claimed that some nongovernment organizations (NGOs) were being unwittingly used by drug lords to discredit the Duterte administration’s bloody war on drugs.

Without naming the groups, Cayetano said advocates who accused the administration of being behind summary killings and rights abuses were only helping frustrate President Duterte’s desire to rid the country of illegal drugs.

The President, he said, had become exasperated by criticisms about his supposed violation of human rights that had drawn international attention because of the noise created by his critics in the country.

“What we’re pointing out is it’s not just the ICC,” Cayetano said in a news conference last week. “We’re looking at the whole human rights mechanism that’s supposed to be there to assist the government in fulfilling its human rights obligation.”

“Now it’s name-and-shame. It’s being used for politics, for business,” Cayetano said.  “Unwittingly, some of the NGOs are being used by drug lords. That’s the reality.”

These NGOs espousing human rights, he said, had become “big shots” in international conferences without exerting any effort to take an impartial look at the human rights situation in the Philippines. “If you look at the studies of the NGOs, it was not (the result of) a legitimate investigation. There was no scientific method.”

“For example, one outspoken NGO here in the Philippines who’s making accusations left and right … part of their advocacy is to legalize drugs,” he said. “So you see they are pushing an advocacy, an ideology. I’m saying it’s not an impartial and independent investigation,” he added.

Cayetano attended the latest session of the UN Human Rights Council in Geneva earlier this month.