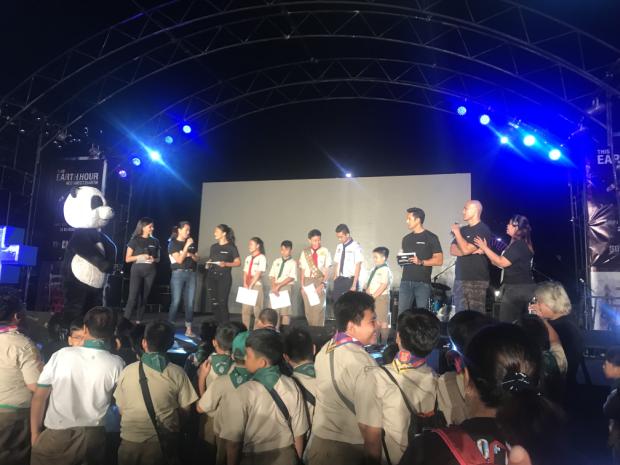 Around 500 Boy Scouts flocked on Saturday to the Cultural Center of the Philippines in Pasay City for this year’s Earth Hour celebration.

In their uniforms, the Scouts were at the CCP grounds from 6 p.m. until past 9 p.m. for the Earth Hour switch-off.

Themed “Connect2Earth,” Earth Hour, which was led by the World Wide Fund for Nature (WWF), called for the protection of Earth’s biodiversity to counter the worsening impacts of climate change.

CCP was the venue of the first Earth Hour in the Philippines a decade ago. The CCP fountain was switched off exactly 8:30 p.m. to start the Earth Hour.

Some buildings, including the CPP and those at Star City, switched their lights off. But the lights in nearby hotels and business establishments in Pasay City remained on.

The Scouts were mobilized as part of a global partnership to engage the World Organization of Scout Movement (WOSM) under its Environmental Education program, the WWF said.

“There are at least 180 countries participating in the Earth Hour. The switchoff is symbolic…that we are connecting to Earth. It’s very important the boyscouts are here. Taking care of the environment is inherent in them,” said Joel Palma, WWF-Philippines’ CEO and President.

Janice Curtado, public relations officer of the Boy Scouts of the Philippines, said the Scouts have been participating in the annual Earth Hour before, but only during the switchoff in malls and homes.

“This year is different because some [of the 2.6 million members of the] BSP participated in the actual program,” she said.

Before the switch-off, the Scouts joined various activities, including the iceberg path game and checked out the booths for environmental pledges, Curtado said.

There were free food and ice cream for them.

In a statement, lawyer Angela Ibay, Earth Hour Pilipinas national director and WWF-Philippines Climate and Energy Program head, said: “We strive to build on the gains of Earth Hour to help drive policies, awareness and actions that would support local, national and global initiatives to stop negative climate impact and biodiversity loss.”

She also read a letter from President Rodrigo Duterte during the celebration. Duterte showed support for WWF and encouraged people to take “strides in finding solution to climate change, ecological degradation,” and other environment issues.

Climate change is a priority of the Duterte administration, according to Rachelle Sibugan Herrera of the Climate Change Commission.

“President Duterte has a very clear directive at the Climate Change Commission. More than just an hour of switching off. It is an hour of reflecting to ensure we have very low carbon usage… and we work with local government,” she said.

Herrera said last year’s Earth Hour was able to save 362 megawatts of energy.

“I hope we are able to break the record this year.This signifies our resolve to call on the world so we will act urgently to save our planet,” she added.

Meanwhile, Christopher Villarin of the Department of Environment and Natural Resources said the Earth Hour should go beyond one hour.

“We should practise sustainable and eco friendly lifestyle. We should every day be conscious in our carbon footprint,” Villarin said, thanking WWF in its participation in the coastal cleanup conducted by the DENR. “The [cleanup] showed the impact of plastic waste in our water bodies.”

Besides Jaworski, the other hosts of the program were WWF-Philippines national ambassadors Iza Calzado, Marc Nelson, and Rovilson Fernandez, and national youth ambassador Janine Gutierrez.

There were several nature-inspired performances – including those by former child actress Isabella de Leon and Sanghabi and folksinger-activist Lolita Carbon.

Around 300 bikers from 21 bike groups under the Hataw Padyak Federation also participated in the event and earlier rode their bikes for more than 15 km from Malabon and other cities to promote low-carbon mobility through cycling.

The Boy Scouts and the WWF ambassadors ended the program by reading their pledge for the environment.

Nelson, for one, pledged to influence others to do walk more, limit the use of plastic, fuel and all other sources.

“Do what you can for the planet, for mother Earth. When we come back here for the next Earth Hour, I hope you will spread the word even further,” he told the crowd.

The annual global lights-out event started in Sydney, Australia in 2007.

But more than the one-hour switch off, the WWF-Philippines urges Filipinos to observe sustainable living and support advocacies pushing for low-carbon cities, renewable energy development, sustainable food production and consumption, forest and water conservation, and wildlife protection, among others. /atm

Read Next
Organizers hope to draw half a million to gun control rally in US
EDITORS' PICK
Metro Manila logged most number of new COVID-19 cases — OCTA Research
WHO says monkeypox is not yet a health emergency
House energy committee chair Arroyo bats for cheap electricity
A massive highway complex makes living in the South highly attractive
Beyond the Chocolate Hills: A farm-to-table, heritage culinary adventure of Bohol
Guarding Sara: Why next VP is getting own security team
MOST READ
Leon Barretto steps up for sisters, asks dad Dennis Padilla: ‘Please stop resorting to public shaming’
LOOK: Rita Daniela pregnant with first child
Bea Alonzo, under lie detector test, says she wants prenup agreement with future husband
Marjorie Barretto to speak up on Dennis Padilla, kids’ relationship ‘in time’
Don't miss out on the latest news and information.