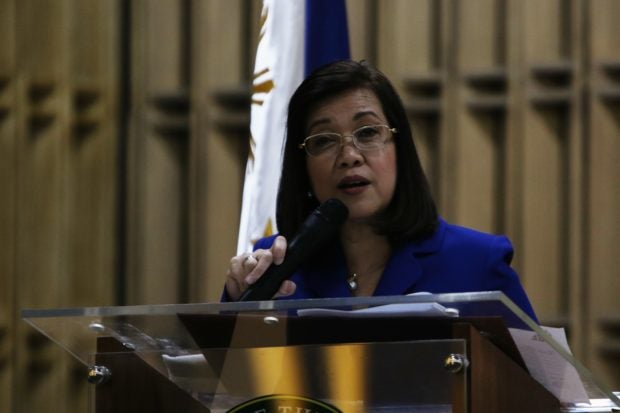 The countdown has begun for the approval by the House of Representatives of the articles of impeachment against Chief Justice Maria Lourdes Sereno.

Before adjourning for a seven-week recess on Wednesday, the House, during its plenary session, referred Committee Report No. 686 to the committee on rules chaired by Majority Leader Rodolfo Fariñas.

Under the House Rules of Procedure in Impeachment Proceedings, the rules panel has 10 session days from the submission of the justice committee report to put the matter on the calendar.

The House plenary would then have 60 session days to put the report to a vote.

The House would have ample time to wait for the Supreme Court’s decision on the quo warranto petition brought by Solicitor General Jose Calida, challenging the validity of Sereno’s appointment.

The Integrated Bar of the Philippines (IBP) has announced a plan to ask the Supreme Court to throw out Calida’s petition.

Speaking in a forum at the University of the Philippines Diliman in Quezon City on Thursday, Sereno welcomed the intervention and threw a jab at the impeachment complaint against her, saying “the complainant and his enablers” were bringing up imagined offenses against her, including infractions she allegedly committed when she was just 26 years old.

“It’s a wonder why they didn’t try to dig up my high school record,” she said.

The six articles of impeachment, approved on Monday, concerns Sereno’s alleged culpable violation of the Constitution, betrayal of public trust, corruption, and other high crimes.

These are her failure to file financial statements 17 times, disclose her true wealth, and pay the correct taxes; misuse of P18 million in public funds; arrogation upon herself of the collegial and deliberative functions of the Supreme Court; deliberate and malicious abuse of her position as ex officio chair of the Judicial and Bar Council;

Deliberate violation of the principles of separation of powers among the three branches of government; and deliberate failure to comply with her oath of office through tyrannical abuse of discretionary power.

Meanwhile, lawyer Wilfredo Garrido Jr. asked the IBP on Thursday to disbar Lorenzo Gadon, who brought the impeachment complaint against Sereno, for his “disgraceful conduct” during the impeachment hearings in the House.