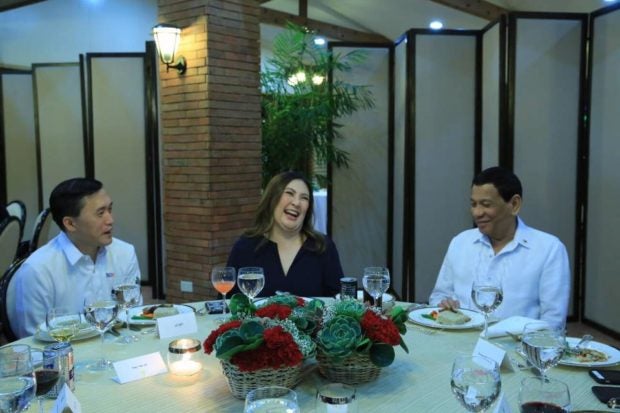 GUESS WHO CAME TO PALACE DINNER President Duterte entertains singer-actress Sharon
Cuneta during dinner at Malacañang on Tuesday in this photo posted on Facebook by Special
Assistant to the President Christopher “Bong” Go.

“Their political differences are not personal,” the actress said of Mr. Duterte and her husband in a post on social media shortly after the President’s special assistant, Christopher “Bong” Go, shared photos of their dinner.

“As Tatay Digong said earlier, they respect each other even if they disagree on certain things … That’s why it’s nice that we live in a free country. Politics? Temporary. My Dad was the President’s good friend? Hey—deal closed! Blessed to have a hubby like my dork,” Cuneta posted.

She and her brother, Chet, shared a meal of sardines with the President, Go, and other guests, Agriculture Undersecretary Berna Romulo-Puyat, Carina Guevarra and Happy Ongpauco-Tiu.

Pangilinan was nowhere in any of the pictures that Go posted, but in a text message to reporters on Wednesday, the senator said he had no problem with his wife having dinner with the President.

“My differences with the President is just work and nothing personal,” the senator said, adding that he had known Mr. Duterte since 1999 and that the President helped him campaign for the Senate in 2001.

Pangilinan said he was able to help Davao City through the implementation of various projects.

Mr. Duterte blamed Pangilinan for the passage of the Juvenile Justice and Welfare Act of 2006, which the President said was being used by syndicates to push children into committing crimes, knowing that under the law, offenders aged 15 and below are exempted from imprisonment and other penal sanctions.

On her Instagram post, Cuneta said her brother was so happy to have met Mr. Duterte, his “idol and hero,” who also happened to be good friends with their father, former Pasay City Mayor Pablo Cuneta.

“Tonight, I was not only happy and honored to have dinner with President Duterte, but also to make my Kuya the happiest I’ve ever been able to make him. Hope you’re happy, Daddy! I love you so much, Kuya ko. And thank you, Mr. President. We pray that God’s hand be upon you so that you may steer our country where He knows it will be best! May God bless you, sir,” the actress posted.

Replying to a comment on Instagram, Cuneta said the President was quite the comedian during their dinner.

He made them laugh so hard that her stomach began to hurt, she said. But he also shared serious stories, she added.

The megastar and the President shared an evening of music as well, as each of them performed a song number.

The dinner guests also got a memento—a pen inscribed with the words “Malacañang Palace.”

The President’s eldest daughter, Davao City Mayor Sara Duterte, has long been a fan of Cuneta.

In an October 2017 text message to Inquirer.net, the mayor said that despite her recent tirades against Pangilinan, she had “high respect for Ate Sharon [who] has been very kind to me since I was a child.”

Cuneta, whom she first met in the early 1990s, has always been “apolitical despite growing up with a politician father,” Mayor Duterte added.

In a speech last September, the President also mentioned that the megastar had been a longtime idol of his daughter Sara.

“I asked Inday (Sara), when she was Grade 6, Grade 5, what birthday gift do you want? She said, ‘I want to be with Sharon Cuneta,’” Mr. Duterte recalled.

The President said Pangilinan then relayed Sara’s request to the actress and arranged a meeting between the two. —With a report from Christine O. Avendaño