Bohol resorts given 6 months to clean up 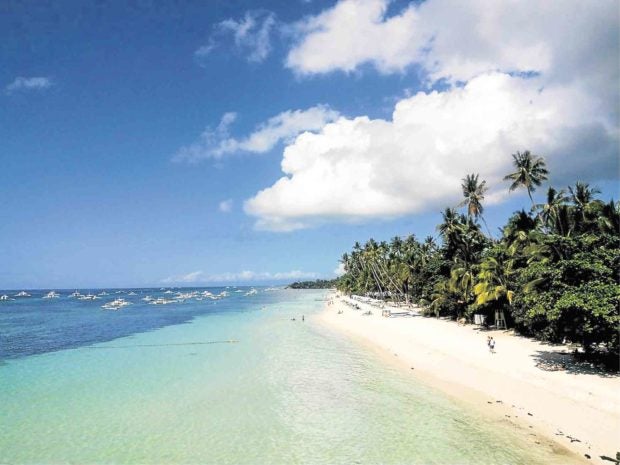 SUMMER PLAYGROUND A stretch of powdery white sand and clear waters have been attracting tourists to Alona Beach on Panglao Island, one of the most popular summer destinations in Bohol province. LEO UDTOHAN

PANGLAO, Bohol — Environment Secretary Roy Cimatu has given owners of illegal structures on Panglao Island in Bohol province six months to demolish these or else charges would be filed against them.

Cimatu issued the directive after inspecting the shorelines of Alona Beach in Barangay Tawala, Panglao town, on Tuesday morning where he found several structures built along the 20-meter easement zone.

Although Cimatu did not give figures, records from the Department of Environment and Natural Resources (DENR) said 87 establishments violated the easement zone in the villages of Tawala, Bolod, Libaong and Danao in Panglao town, and Bingag in Dauis town.

Panglao Island, considered the crown jewel of Bohol tourism, is composed of the towns of Panglao and Dauis.

Cimatu inspected the structures along Alona Beach, named after actress Alona Alegre, who starred with the late actor Fernando Poe Jr. in the 1973 movie, “Esteban,” which was filmed here.

Cimatu, however, did not inspect septic tanks and wastewater facilities of establishments in Panglao.

The DENR earlier identified the lack of septage treatment facility and “bottomless” septic tanks as contributors to the environmental problems on the island.

As of March 7, the Environmental Management Bureau, an attached agency of the DENR, identified 344 establishments in Panglao without valid wastewater discharge permits.

Among the structures ordered removed by Cimatu were the marker of a high-end resort and a portion of its swimming pool built on the easement zone.

Cimatu also told a representative of a developer that
its ongoing construction of a 12-story beachfront hotel on Alona Beach was illegal.

The structure was declared illegal by the Office of the Building Official of Panglao when its building permit was recalled more than eight months after it was issued a notice for violating the municipal zoning ordinance and the Comprehensive Land Use Plan.

Marcelina Mejos, 70, who tends a store on Alona Beach, said she would follow the
order.

“I will volunteer to move. I just put movable umbrellas here and sell some fruits instead,” she said.

But some property owners told Cimatu that their buildings or its sections were on the easement zone because a measurement conducted by the DENR several years ago allowed them to put up structures in this area.

Resort and dive shop owners told Cimatu that they would follow if other business owners would comply with the order.

“We will follow. But [it should] not only [be] us but [this should apply to] all so that it would be fair,” said a dive shop owner who wanted to be identified only as Mike. 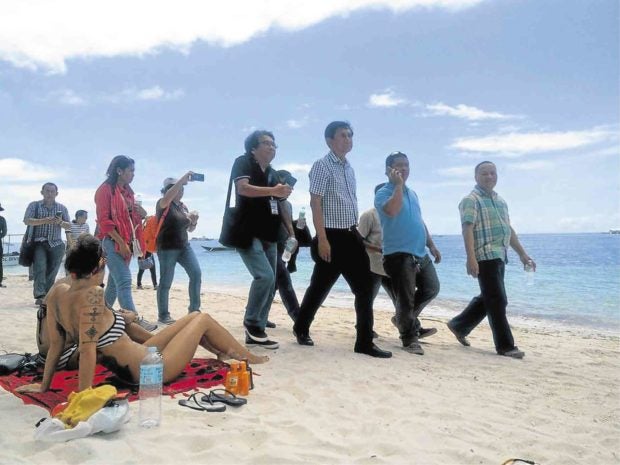 Cimatu said the problem in Panglao was not as bad as the crisis facing Boracay Island in Aklan province, which was earlier described by President Duterte as a “cesspool” due to its dirty waters and uncontrolled development and congestion.

The crackdown on violators of environmental laws and easement and building rules in Bohol, Palawan, and other tourist spots in the country came after the government vowed to clean up Boracay.

Socioeconomic Planning Secretary Ernesto Pernia, who accompanied Cimatu in the inspection here, said the government was serious in cleaning Panglao.

“Awareness among resort owners in Panglao has been raised to a high level,” said Pernia, a native of Bohol.

While the province enacted an environment code in 1998, Pernia said local officials lacked the will to enforce it, which led to several environmental violations in Panglao.

He asked local government officials to be “more watchful and vigilant,” and implement rules and regulations “in a sustained manner.”