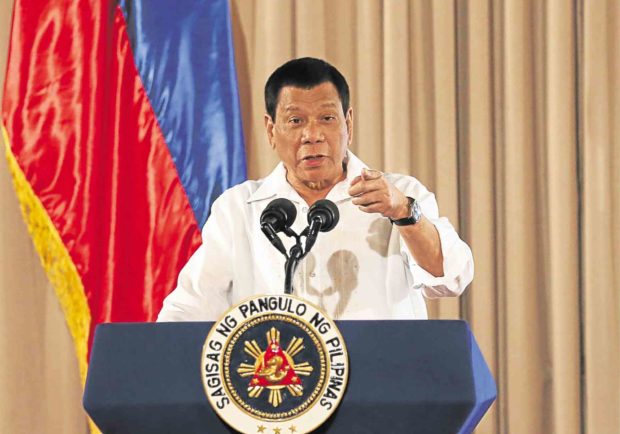 President Rodrigo Duterte on Tuesday said he was in favor of the anti-political dynasty provision in the proposed new constitution. But he said public might reject the proposal.

“A few of the principled men, I would say, want this kind of thing about dynasty [to be] abolished. I am for it,” he said. “Ang problema: Lulusot ba ‘yan?” he said during the General Assembly of the League of Municipalities of the Philippines at the Manila Hotel on Tuesday.

He said some voters would want continuity of the programs a family member had started.

“Because sa atin, pagkatapos mo eh they would ask for your son or your wife,” he said.

He cited his own experience: After serving for more than 22 years as Davao City mayor, he was replaced by her daughter, Sara Duterte-Carpio.

“I don’t know, but Inday [Sara] really is a… she’s a character and she can be mean. The Davaoeños want to continue ‘yung ano, ‘yung nagawa mo. Ano ba talagang nagawa ko?” he said. “Why is it so peaceful, so clean? Drug [use] is minimal and the law and order is very good. It took me about three terms really to perfect the system.”

Duterte has been accused of being behind the controversial Davao Death Squad that killed criminals in the city.

“Kung sabihin nila namatay, marami talagang namatay because I was one of those and many siguro I think who really wanted to get rid of the drugs,” he said.

The Consultative Committee (Con-Com) tasked by Duterte to review the 1987 Constitution had earlier decided to recommend regulating political dynasties instead of banning them.

Read Next
House approves budget reform bill on final reading
EDITORS' PICK
Do all the things you do, faster
Motorcycles, smartphones, and cash prizes up for grabs in TNT’s ‘Tuloy Ang Saya’ Raffle in Mindanao
House energy committee chair Arroyo bats for cheap electricity
NCR at increased COVID risk again
New PS-DBM director says DepEd laptop MOA ‘not legal’
House okays budget; ways to go in Senate
MOST READ
Shopee PH gets flak for getting Toni Gonzaga
Robredo’s tarpaulin portrait at Palace just a ‘placeholder’
Robredo supporter tackles elephant in room: No massive fraud in 2022 polls, surveys were just right
DepEd: We are in a crisis situation in education sector
Don't miss out on the latest news and information.