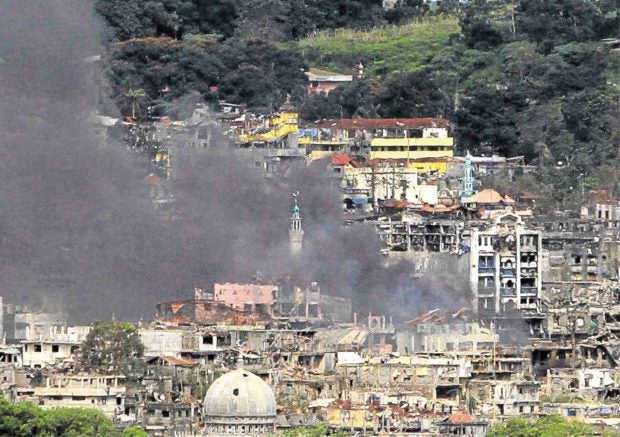 CITY UNDER SIEGE This section of Marawi is among the major battlegrounds between government troops and members of the Maute and Abu Sayyaf groups who laid siege to the city. —RICHEL V. UMEL

MARAWI CITY — Ten months had passed and families whose members had been reported missing at the height of the fighting between government troops and Islamic State-influenced terror groups had yet to get closure, a Maranao civil society leader said.

Samira Gutoc, spokesperson for the Ranao Rescue Team, said the government earlier formed the Management of the Dead and Missing (MDM), led by the Department of the Interior and Local Government, but nothing had been heard of its work.

“In the Geneva Convention, under the subconvention on humanitarian protection, the state should exert efforts to connect and link the missing persons and relatives. What is being done about it? Please give us a report,” she said in a speech during Sunday’s commemoration of the 50th anniversary of the Jabidah massacre here.

More than 160 people were reported missing at the height of the crisis, which started when terrorists laid siege to Marawi on May 23 last year. Forty-seven were eventually found dead, according to figures earlier released by authorities.

But Gutoc said the number could be more than what was being reported. She said when the bombardments started on May 26, the day Muslims marked the start of Ramadan, a large number of civilians were not able to immediately get out of the city.

“At the time of Ramadan, there was an airstrike even when civilians were still inside [the war zone]. We are talking of thousands of civilians [here],” she said.

To date, Gutoc said the fate of the rest of the missing had not been known.

“Everyone should be located and reunited with their families,” she said. “Don’t wait for the victims to come to you; they won’t.”

She also urged the military to speed up the clearing of 24 villages considered ground zero—or where the fiercest battles took place—to hasten the return of displaced Marawi residents.

Gutoc warned that the longer civilians stayed outside of their former villages, the higher the resentment would become.

The Jabidah massacre refers to the execution of 27 young Moros on March 18, 1968, because of the botched “Oplan Merdeka,” the government plan to invade Sabah. Only one of them survived—Jibin Arula—to tell of the ordeal of the Moros commissioned by the administration of then President Ferdinand Marcos for the invasion. Arula died in a car accident in 2010.

Zia Alonto Adiong, spokesperson for the Lanao del Sur crisis management committee, said the provincial government did not have any update on the number of retrieved cadavers or any information on missing persons because the MDM had not given them copies of its reports.

“They have stopped sending us reports so we have no idea … if they found any of the missing persons or what happened to them,” Adiong told the Inquirer by telephone.

Adiong hoped that nongovernment groups and local families could work together to determine the fate of the missing persons.

“We hope they would approach us and share whatever [information] they have,” Adiong said.

Adiong admitted that the “general sentiment” of the people was that clearing operations in the city were taking too long.

Col. Romeo Brawner Jr., deputy commander of the Joint Task Force Ranao, said the military earlier projected that the clearing would be completed next month.

But the military, he said, encountered a major problem because the excavator its personnel had been using had bogged down.

“Japan has donated heavy equipment but these are for the use of the Department of Public Works and Highways
(DPWH). The DPWH did not lend any to us,” Brawner said.

But he said the clearing operations, which entailed the recovery and disposal of unexploded bombs, had accomplished much since President Duterte declared the liberation of Marawi in October.

“We have cleared 80 percent of the 24 villages already,” Brawner said. —With reports from Allan Nawal and Divina Suson