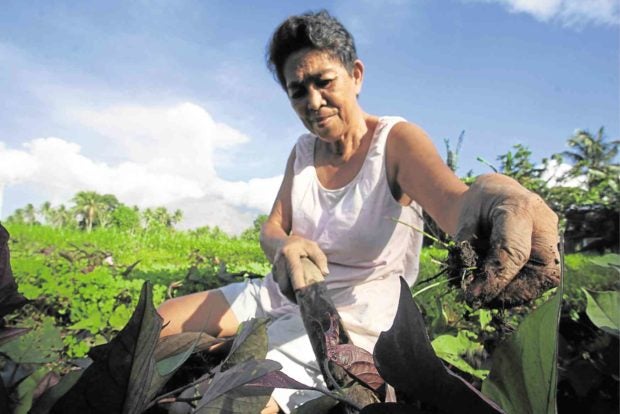 In this photo taken in February, farmer Floreña Miña, 66, returns to her village of Bonga in Legazpi City to harvest vegetables to feed her family. —MARK ALVIC ESPLANA

NABUA, Camarines Sur — Farmers whose farms were damaged by ashfall from Mayon volcano or whose livelihood had been disrupted after they left their communities can now avail of an interest-free loan of P25,000 from the government, presidential spokesperson Harry Roque said here on Monday.

The loan is under the Survival and Recovery Assistance Program of the Department of Agriculture (DA) and will benefit farmers in Albay province.

Roque said the assistance was promised by President Rodrigo Duterte when he visited Albay in January.

The President, during that visit, was briefed about the situation of thousands of evacuees who were asked to leave their villages in danger zones around Mt. Mayon after the volcano started spewing out ash and lava in mid-January.

Rebeta said some 60,000 farmers were affected after Mayon showed signs of unrest starting Jan. 13 when the Philippine Institute of Volcanology and Seismology raised the alert level to 3, causing thousands of residents living within the 6-kilometer permanent danger zone and the 7- to 9-km extended danger zones to flee and stay in evacuation centers for two months.

Roque said a farmer could use P5,000 from his loan to cover his daily needs. The remaining P20,000 will be released when the farmer returns to his community to resume farming.

He said local governments, through city and municipal agriculture officers, would be asked to submit to the DA a list of affected farmers in their areas who could qualify for the loan. The DA, in turn, will endorse the list to the Credit Policy Council, which will determine the amount to be released to the conduit bank or cooperative. —REPORTS FROM JUAN ESCANDOR JR. AND MICHAEL B. JAUCIAN