30 Hummers up next for destruction in Cagayan 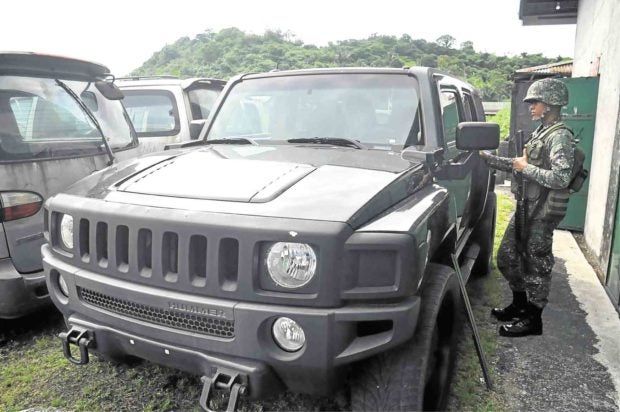 A soldier takes a closer look at one of at least 30 Hummers at the car lot in Casambalangan Village in Santa Ana, Cagayan. The smuggled vehicles had been condemned to be destroyed. —MELVIN GASCON

SANTA ANA, Cagayan — At least 30 Hummers would be next in line for the wrecking crew in the ongoing program of the Cagayan Economic Zone Authority (Ceza) to destroy more than 800 vehicles smuggled through Port Irene here.

“The next step for us is to not to lose sight of these remaining units and make sure nothing will be sneaked out before they are destroyed,” Lambino said on Saturday.

On Friday, he inspected the remaining 841 vehicles impounded on a 5-hectare lot in Barangay Casambalangan here. Among these vehicles were a Lamborghini Gallardo, Porsche 911s and Cayennes, Hummers and Mercedez Benzes, a BMW and Harley Davidson motorcycles.

Ceza officials earlier said they remained clueless on who owned the smuggled vehicles. The listed importer, Fenix (Ceza) Inc., is owned by Jaime Escaño, a member of the Ceza board.

Lambino said he was awaiting the concurrence of the 13-member Ceza board before proceeding with the condemnation of the remaining vehicles.

But the board, during its regular meeting on Friday, failed to officially approve the destruction due to what officials said was a defect in the importers’ notice of withdrawal of their opposition, Lambino said.

“We noted that the appeal was lodged by counsels for Fenix, but it was just the corporate secretary who filed the notice of withdrawal,” he said. —MELVIN GASCON