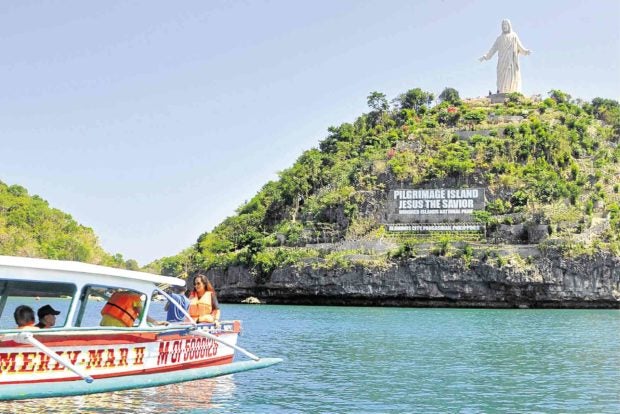 The statue of Christ the Savior towers above Pilgrimage Island, a new attraction at Hundred Islands National Park in Alaminos City. — PHOTOS BY WILLIE LOMIBAO

The island is home to a 17-meter (56-foot) statue of Christ the Savior, which had attracted more than 1,000 visitors since its soft launching in May last year, Miguel Sison, city tourism officer, said.

Pilgrimage trips, which used to stop in Manaoag town (site of the Minor Basilica of the Holy Rosary of Manaoag), now extends to Pilgrimage Island.

Other sites that draw Catholics here include the Redeemer’s Cross in Bani town, Saints Paul and Peter Church in Calasiao town and St. James Church in Bolinao town.

On ordinary days, Pilgrimage Island is one of the major island-hopping destinations in the HINP. It used to be called Martha’s Island, until the local government realized it was best suited for a giant Christ statue.

From the wharf, tourists usually go to Governor’s Island first, before moving on to Pilgrimage Island, and then to Children’s Island or to Marcos Island.

Sison said his office had prepared for the swarm of pilgrims who would be visiting the islands during Holy Week. 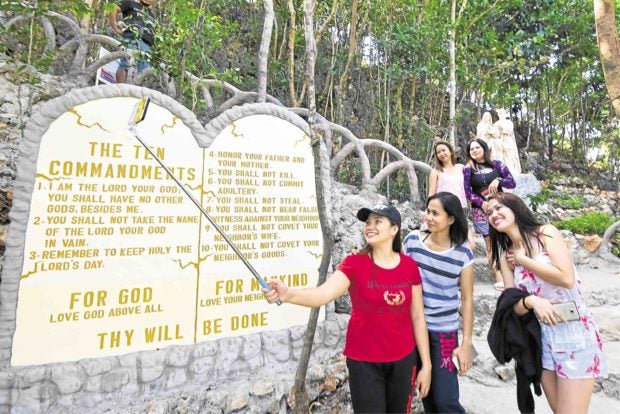 Visitors enjoy taking their pictures beside religious landmarks on the island.

Stations of the Cross

Aside from the giant Christ statue, Pilgrimage Island features life-size statues of the Holy Family and the Last Supper.

He said the Stations of the Cross along the 263-step concrete stairs leading to the statue of Christ would be completed in time for the Holy Week. 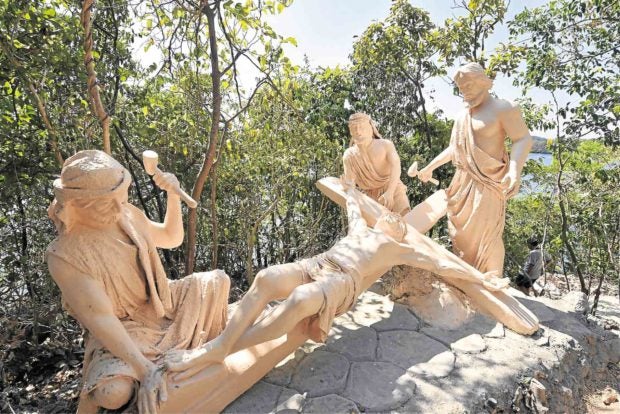 A life-size sculpture of the crucifixion, one of the scenes in Stations of the Cross.

Among Catholics, the Stations of the Cross serve as the ritual path that commemorates Jesus Christ’s last day on earth. The stations feature specific events of Christ’s final moments, beginning with Roman governor, Pontius Pilate, who condemned Jesus to death.

The Diocese of Alaminos may schedule Masses during the Holy Week.

“This is the faith tourism component of Hundred Islands,” Sison said. “We urge tourists to visit Pilgrimage Island first, say a prayer or light a candle, before going to the other islands and enjoy.”