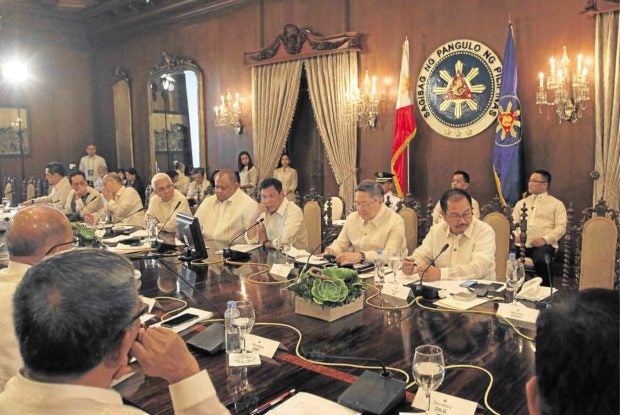 The President presides over a Cabinet meeting in Malacañang. —INQUIRER FILE PHOTO

A Cabinet revamp may be in the offing as President Duterte is not happy with certain members of his official family.

Presidential spokesperson Harry Roque said in a radio interview on Friday that Mr. Duterte shared that he was displeased with some of his Cabinet secretaries when he met with newspaper columnists in Malacañang recently.

“He really said there were secretaries whose performance he was not happy with, and there will be changes in the Cabinet,” said Roque.

But he said the changes were not expected to happen in the following week.

He did not identify who these Cabinet members were, but he said that Mr. Duterte would not hesitate to fire the underperformers.

“If he no longer trusts a [Cabinet member], the President would not wait for this member to resign, he would really fire this official. As you know, he has fired so many people,” he said.

Earlier this week, Roque said Mr. Duterte still trusted Justice Secretary Vitaliano Aguirre II even if he was unhappy with the move of Department of Justice (DOJ) prosecutors to dismiss the cases against high-profile drug suspects Peter Lim, Kerwin Espinosa and Peter Co.

The dismissal drew criticism and outrage, along with accusations that the government was only targeting the small players in the drug war and letting the big fish get away.

The DOJ prosecutors said the suspects were cleared due to a lack of evidence submitted by the police.

Espinosa is a self-confessed drug dealer while Lim, a Cebu-based businessman, was tagged as a big-time drug player by Mr. Duterte himself. Lim denied the allegation when he met with the President.

Co is a convicted drug lord. —LEILA B. SALAVERRIA