Peter is out. Kerwin is out. What about me? De Lima asks court 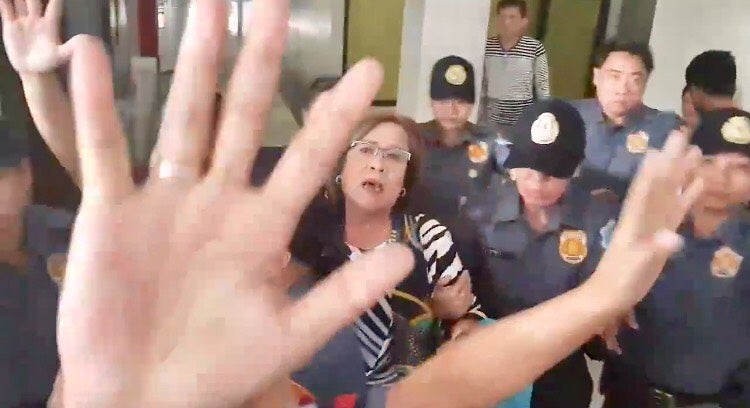 Detained Senator Leila de Lima has taken steps to turn the tables on the Department of Justice (DOJ) by using its arguments to dismiss the drug cases against Peter Lim and Kerwin Espinosa to reverse her indictment.

De Lima’s camp on Friday said an Omnibus Motion was filed before the Muntinlupa Regional Trial Court (RTC) Branches 205 and 206 to challenge the new charges provided in the new case information (charge sheet) filed by the DOJ.

The DOJ initially indicted De Lima for illegal drug trading, or violation of Section 26(b) of Republic Act 9165 or the Comprehensive Dangerous Drugs Act of 2002.

In the amended charge sheet, the DOJ accused the senator of conspiracy to trade illegal drugs, which is a violation of Section 5 of the same law.

“The new charge is different because it merely relies on the alleged agreement between the Senator and the drug convicts to sell drugs. Instead of showing the drugs actually traded, the DOJ only has the testimony of the Bilibid Convicts to show,” De Lima’s camp said in a statement.

The amended charges, they said, were “void in itself” because the DOJ could not decide if she would be accused of drug trading or mere conspiracy.

Her camp said that the DOJ “has no evidence at all” to back the amended charges because it claimed during the preliminary investigation that there was “actual drug trading,” not conspiracy by mere agreement.

The senator’s camp cited page 38 of the DOJ resolution that dismissed the drug cases against Lim and Espinosa.

The DOJ resolution stated that “if the intended act was already accomplished, the conspirators should be then charged under Section 5 (illegal drug trading).”

It also stated that “it would be somewhat illogical that despite its accomplishment, the conspirators of the crime should still be held liable for the preparatory act of conspiracy.”

Based on the resolution, De Lima’s camp said that “conspiracy may not be charged as a crime because it is already alleged that drug trading has already been committed.”

Moreover, the senator’s camp castigated the DOJ for keeping the resolution “under wraps.”

“What the DOJ failed to recognize and perhaps the reason why they kept the resolution under wraps (the resolution was decided as early as December 2017) is that Kerwin Espinosa admitted drug trading before the Senate AND Peter Lim was pinned by the President himself as a drug lord,” her camp said./ac